Clara Suzuki-Castro, 5, fills up her water gun as she cools off from the heat at the Chamizal Recreation Center. | Danielle Prokop/El Paso Matters

El Paso’s June is heating up and the triple-digit heat wave expected to last through next week could pose a health threat to some of the city’s most vulnerable.

To help counter the risks, the Extreme Weather Taskforce, a volunteer board including members from state, local and federal government agencies, partnered with the City of El Paso and the El Paso Office of Emergency Management to extend hours at seven community centers that also serve as free cooling centers.

“Senior centers are still not open because they are in the last phase for the reopening of city facilities,” said Rick Isaías, a spokesman for the city.

The heat will endure through next week, according to the current forecast.

Jason Grzywacz, a meteorologist for the El Paso office for the National Weather Service in Santa Teresa, said high temperatures between 100 and 105 degrees will most likely continue through next Wednesday. Hope for relief is slim, with only a 10% chance of weekend thunderstorms.

“One model is showing that we’re going to stay in the hundreds. Another one shows we would maybe get a break from that — and by break, that would be like 95 to 100 (degrees),” Grzywacz said.

Climate change has driven June temperatures upward in El Paso in recent decades. El Paso has had two days over 100 already in June, and the forecast currently calls for at least five consecutive triple-digit days. It’s now typical for about half of June days to reach at least 100 degrees. 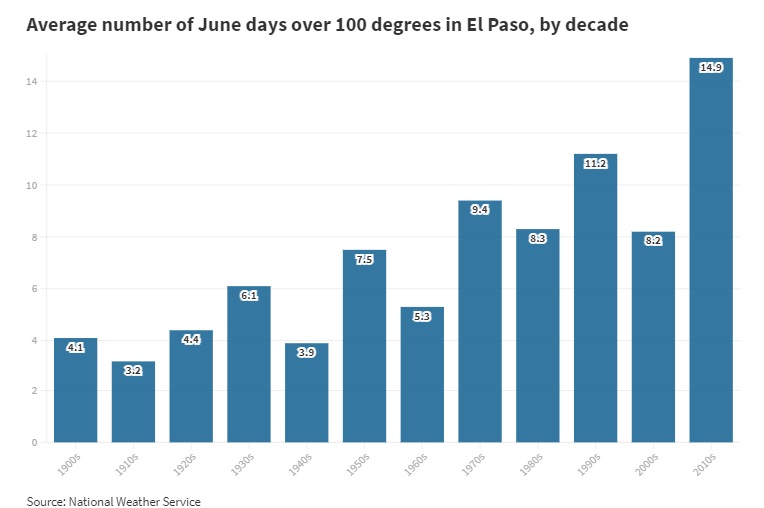 Temperatures above the human body’s core temperature, about 98.6 degrees, can mean trouble for cooling mechanisms like sweating, and present a greater threat of heat illness to older people, people with disabilities, children and infants.

In the long term, heat waves cause more deaths than other weather disasters such as hurricanes or tornadoes. Temperatures in the contiguous U.S. are rising, and concern is that heat-related deaths are also on the rise.

The Centers for Disease Control found excess heat caused an average 702 deaths each year between 2004 to 2018 and considers heat-related deaths “a continuing public health concern in the United States.”

But even that may be an undercount.

Modeling from the Environmental Protection Agency shows heat as a contributing factor or underlying cause in as many as 1,300 heat-related deaths, since heat stress can increase the chances of dying from heart conditions or respiratory diseases such as pneumonia.

The EPA’s study found “(t)hese causes of death are much more common than heat-related illnesses such as heat stroke,” meaning the number of deaths caused by heat are underestimated.

In El Paso, 19 people died due to heat exposure between 2014 and 2019 according to data from the El Paso County Medical Examiner’s office provided to the Extreme Weather Taskforce.

Gloria Ortiz, who chairs the Extreme Weather Taskforce, said deaths from the heat are preventable if people can access cool places and water.

“On those days, when it’s over 100 degrees, everybody should be called into action. We all know seniors, we have neighbors, friends, family,” she said. “I’m asking you to call them on that day, remind them to drink water, check on them, run their errands for them and remind them not to be outside.”

She said a worrying trend in the data is younger deaths: people in their 30s down to their teens.

“It’s not just seniors, the heat affects all of us,” she said. “We all need to be educated on what to wear, to drink water and stay out of the sun.”

The taskforce also provides free fans but prioritizes seniors or families without working air conditioning. Ortiz said people can ask for a fan by calling 2-1-1.

“We’re trying to get these out to people with absolutely no air in the home,” she said.

She said by Wednesday she had 60 requests for the 100 fans available, and was concerned that demand would rise as temperatures climb. She said anyone who wants to donate a fan can drop one off with any fire station in El Paso.

Protect yourself from the heat

• Drink water throughout the day, even if not thirsty.

• Wear sunscreen and a hat when outside.

Prokop is a climate change and environment reporter with El Paso Matters. She’s covered climate, local government and community at the Scottsbluff Star-Herald in Nebraska and the Santa Fe New Mexican. She can be reached at dprokop@elpasomatters.org.