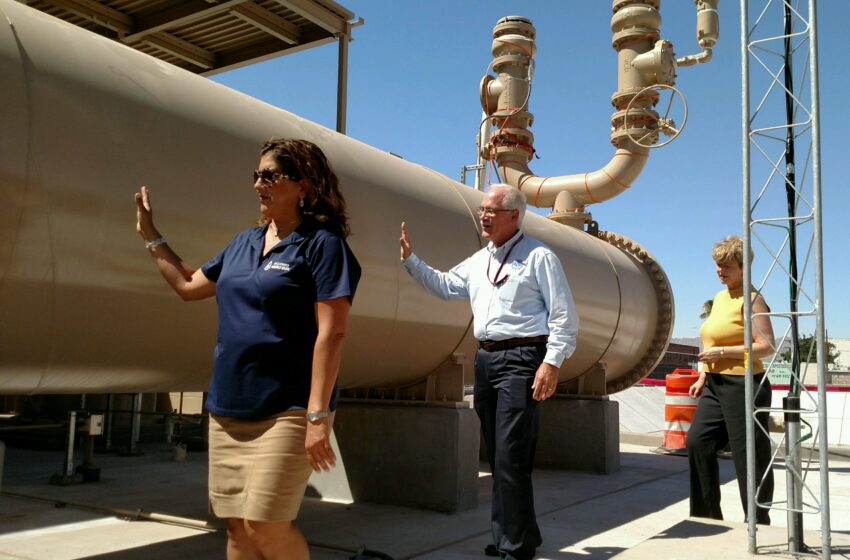 Under a cloudless Monday morning sky, El Paso Water officials as well as representatives of the El Paso Fire Deparment gathered to talk about floodwaters, safety and new equipment meant to keep the city safe during the monsoon downpours.

With the recently completed $25 million pump station and pipeline located near Texas Avenue and Magnolia Street as a backdrop, El Paso Water officials said the completion of the pump station represents the largest single investment that it has made thus far to alleviate flooding along the interstate during the monsoon season.

The new station will enable stormwater flowing from the central mountain ranges to be captured and transferred down to the river; however officials were quick to remind residents of the dangers of flooding.

“It’s important to get the word out,” said El Paso Water Vice President Alan Shubert, “I can’t stress enough that vigilance is never ending in terms of flooding. No matter what we build as engineers, there’s going to be flooding and it’s going to be dangerous.”

“Moving water can cause a hazard, and if there are barricades in the roadway, they are there for a reason,” said El Paso Fire Department Water Rescue Captain Kristian Menendez. “Be very careful with the water. No matter what level it is, if it’s moving it can be dangerous—whether its two-inches or 12-inches, it provides a hazard.”

Fire department spokesman Carlos Briano said that six drownings occurred in 2016—four of them were at canals.

A recent drowning involved a 15-year old who attempted to save his 12-year-old friend who had fallen into a canal at Fabens on July 1.

“Unfortunately, every year the El Paso Fire Department has to respond to water rescues and recoveries in flooded streets, arroyos, and canals,” Briano said. “These are not safe places. The public needs to remember that it only takes a few inches of water to overpower a person or vehicle.”

“You generally want to stay away from any running water. It causes two problems— the physical force behind it is often times is too overwhelming for pedestrians and motor vehicles,” Hefner said. “Running water can also cause damage to the roadway or walkway. What looks like shallow water might be deeper due to erosion”

Because of the dangers surrounding floods, El Paso Water has launched the “Turn Around, Don’t Drown” campaign that consists of billboards, radio public service announcements and social media outreach through September.  The campaign highlights these messages to keep El Paso residents safe during the monsoon season.

Flash Floods Can Kill in a Flash

Storm Drains Can Be Deadly

The Magnolia Pump Station is one of the largest improvements to the Central Stormwater System. The other additions include the Gateway West Pond, which was completed in May, and the Gateway East Pond scheduled for completion this fall. The pump station and two ponds are located in Central El Paso along Interstate 10.