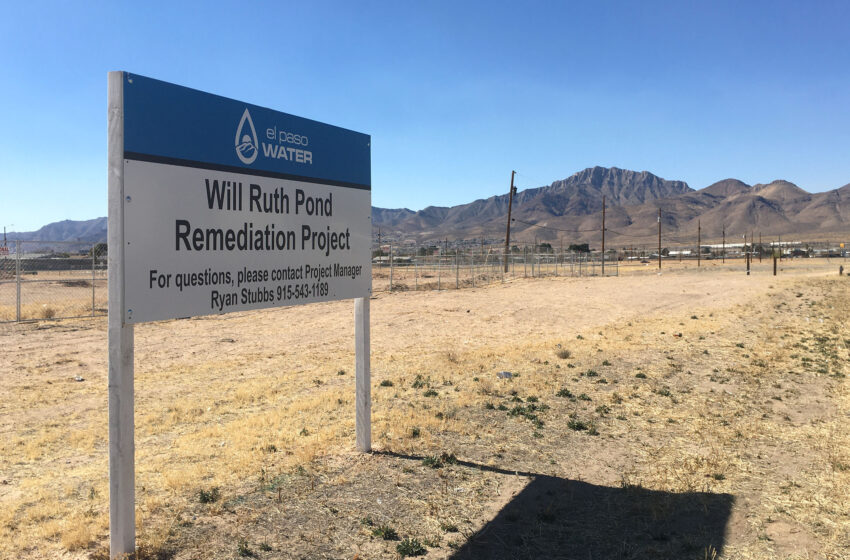 Many engineering students start their academic journeys with visions of working on grand structures and complex machinery. Those visions usually do not include building a pond.

It definitely was not something Ryan Stubbs, a utility engineer associate with El Paso Water, envisioned himself working on as a college student.

But the Will Ruth Stormwater Pond will be more than just a hole in the ground. Once complete it will be one of the largest ponds ever constructed by EPWater in both size and storage capacity, and it will have a tremendous impact on the lives of thousands of people.

Long before Stubbs embarked on the Will Ruth Pond project, he was a University of Texas at El Paso student with an aptitude for mathematics and a curiosity for discovering how things worked. Those interests eventually guided him toward engineering.

“I liked seeing everything they had at UTEP as far as the College of Engineering goes,” Stubbs said of his chosen educational pursuit.

A material science class offered by the college, taught by Dr. Steve Stafford, became one of his favorite courses. “It was interesting the way he taught it,” Stubbs said, “knowing that every single material has a purpose.”

Now working with EPWater’s stormwater utility, Stubbs is managing an immense project that aims to tackle one of El Paso’s oldest challenges – stormwater.

The Will Ruth Pond is a vast stormwater project designed to collect over 114 million gallons of stormwater from nearby streets to prevent it from flowing into downstream neighborhoods. The project is a critical component of the EPWater stormwater plan to improve public safety, and it has not been without its share of challenges.

Early on, a large swath of land between Will Ruth and Threadgill was identified as the ideal location for the pond. It is almost adjacent to Dyer and has several vacant lots, making the capture of stormwater runoff and land acquisition easier. But work to acquire the land contributed to a nearly three-year delay in the pond’s construction.

Throughout this process, the utility remained committed to working with owners of 74 commercial and residential properties to come to fair and equitable purchase prices.

Aware that the area previously was used as a landfill, the utility conducted environmental tests that identified a small area that could potentially contain hazardous materials. An environmental consultant was hired to remove these materials in 2020, and though they were found to be non-hazardous, more was found than was initially estimated.

“It’s good to know what you’re dealing with when you’re digging a big pit. With the preliminary bores, you have an idea of what you’re getting into, but you really don’t know until you actually start digging,” Stubbs said.

“Expect the unexpected,” he added as cautious advice to other engineers embarking on other large-scale projects.

Despite the challenges, Stubbs believes projects like this not only improve flood control but also raise awareness of the dangers of stormwater.

The project will help to reduce stormwater runoff on neighborhood streets, improving mobility during rainstorms. In seeing the size of the pond and the amount of water that can be captured, it has a way of shifting the mentality of people from “just stay at home when it rains, don’t go out,” Stubbs said.

The pond will also yield practical improvements to the lives of many El Pasoans, not just those who live or work near the pond.

“This helps people get around town,” Stubbs said. “And it helps residents lower their flood insurance costs. Overall, it gives everybody a sense of what EPWater is doing to take care of stormwater,” he added.

This project and its numerous benefits seem to be an example of why Stubbs believes the world needs people in his profession.

“Engineers make life easier for everybody. They build roads. They build systems that provide basic needs for everyone, like water systems and drainage systems so they don’t get flooded,” he said.