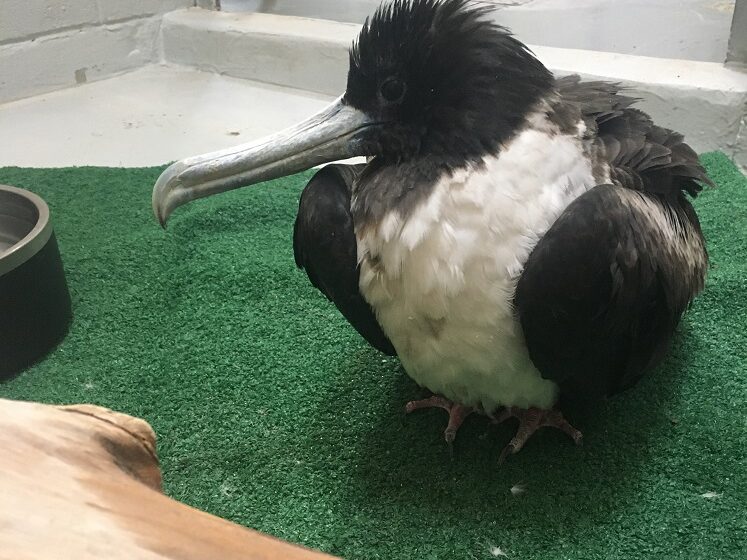 ‘Amelia the Magnificent,’ a Frigatebird who flew off course during a winter storm | Photo courtesy El Paso Zoo

Officials with the El Paso Zoo and Botanical Gardens announced Wednesday that staff are rehabilitating a Magnificent Frigatebird or man o’ war seabird displaced by the winter storm affecting the majority of the state.

“This was an unexpected event,” said El Paso Zoo Director Joe Montisano. “We normally administer treatment and triage injured birds of prey that are brought to us before they go to one of the rehabilitation centers, but up until now they have all been local. I guess this Magnificent Frigatebird heard the Zoo reopened last week and just couldn’t wait to visit.”

A Good Samaritan found the seabird in El Paso and brought it to zoo veterinary staff on Monday, February 15. Chief Veterinarian Dr. Victoria Milne and the veterinary team were able to do a thorough exam and radiographs on the female Frigatebird under anesthesia, and confirmed that she had no broken bones or injuries, but was exhausted and very hungry.

The Frigatebird is currently receiving care and plenty of fish at the El Paso Zoo until she has recovered from her accidental desert voyage and is ready to embark on her long journey again.

Officials add that El Paso Zoo is searching for a partner to help transport the bird back to the coast. The ultimate goal is to get her to a rehabilitation center in the Florida Keys as Frigatebirds are currently in this area and not back along the Texas coast until April.

According to experts from the zoo, Magnificent Frigatebirds are a soaring sea bird, normally found on the tropical waters of the Gulf, Atlantic, or Pacific coasts. Large storms can cause native species to end up in odd locations, often times very worn out from their unplanned detour and in need of support.

The birds use their 7-foot wingspan to soar on the ocean breezes for hours, barely needing to flap their wings. Their grace hides a pirate personality as Frigatebirds are named after a type of fast warship. Although they are capable of plucking fish right out the ocean, they are notorious for chasing and harassing other seabirds until they drop their catch and steal it out of the air.

In addition to assisting in conservation efforts of endangered species, the El Paso Zoo is dedicated to protecting and caring for all wildlife. To learn more about the El Paso Zoo, visit the zoo’s website.