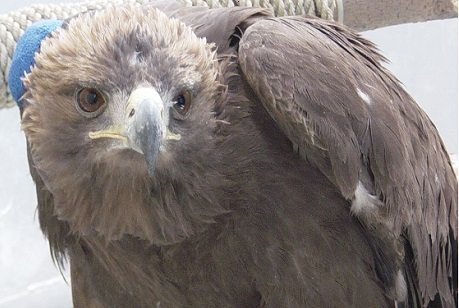 Save the Eagles Day is held every year on January 10 and the El Paso Zoo is part of the celebration that honors these majestic birds of prey and gives thanks to conservation efforts that prevent their extinction.

During the past ten years, the zoo has played an integral role in nursing injured and ill golden eagles back to health. According to El Paso Zoo Veterinarian Dr. Victoria Milne, each of these eagles would likely have died from illness or injury were it not for the efforts of the zoo’s veterinary staff and rehab partners such as Last Chance Forever Bird of Prey Conservancy in San Antonio and Gila Wildlife Rescue in Silver City, New Mexico.

“Once they are healthy, we send them to a wildlife rehabilitator where they prepare the eagles to be released. Like any athlete, the eagles have to get back in shape to fly in the wild after being in the hospital recovering and healing.”

Golden eagles are the national bird of Mexico and one of the largest birds in North America. Known to be impressive hunters, these birds are able to dive at more than 150 miles per hour.

When birds of prey are removed from an area due to injury or illness, the impact on the ecology is profound, making rehabilitation efforts vital to ensure healthy ecosystems.

“We have worked with the El Paso Zoo to release hundreds of hawks, falcons, owls, and eagles,” said founder of the Gila Wildlife Rescue Dennis Miller. “This kind of success rate is almost unheard of in rehab work. The expertise and compassion of the zoo’s veterinary staff is both impressive and heartwarming. We are so glad that we have developed this wonderful partnership with them.”

In addition to caring for golden eagles, the zoo is now home to a male bald eagle named Patriot. Patriot is a rehabilitated bird that could not be released into the wild because of permanent damaged caused by a previous leg injury. Currently, he is working with “The Birdman,” Joe Krathwohl, to acclimate to his new surroundings before meeting the community during the zoo’s Wings of the World bird show.

To learn more about the El Paso Zoo, visit www.elpasozoo.org