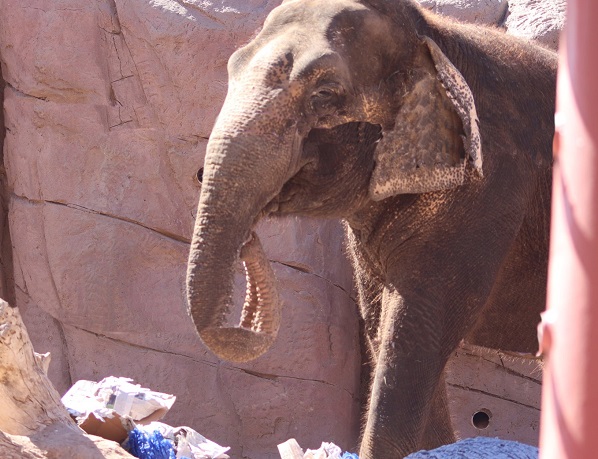 Thursday, residents are invited to tune in as El Paso Zoo’s Asian elephant Savannah predicts the winner of this year’s Super Bowl between the Tampa Bay Buccaneers and the Kansas City Chiefs.

“I think Savannah has a real talent for this, last year she picked the Chiefs correctly, but she does have some Elephant friends at the Tampa Zoo so that may be an influencer for her,” said El Paso Zoo Director Joe Montisano. “Savannah is also one of the oldest elephants on the planet so she may have a soft spot for Tom Brady and the Tampa Bay Bucs. We will just have to wait and see who she picks.”

The selection show will be streamed via the zoo’s Facebook Page starting at 2 p.m. on Thursday, February 4.

Savannah will cast her vote by picking between two helmet-shaped piñatas (Buccaneers and Chiefs), both filled with identical treats, set out for her by elephant keepers.

The event will serve as Savannah’s enrichment for the day. Animal enrichment is given to the zoo’s animals to provide mental and physical stimulation in their daily lives. This event will be a way to do that, and give the community a chance to see just who our elephants choose to take home this season’s trophy.

This will be the 12th year the zoo’s elephants make their prediction. Last year, Savannah chose the Kansas City Chiefs, while Juno chose the San Francisco 49ers. This year, Juno is sitting on the sidelines as she recovers from breast cancer surgery. With just one of the zoo’s elephants deciding this year, let’s hope Savannah picks wisely.

The zoo is preparing to reopen on February 10, but those interested are encouraged to watch the results on the zoo’s Facebook Live on Thursday.

To learn more about the El Paso Zoo, click here.