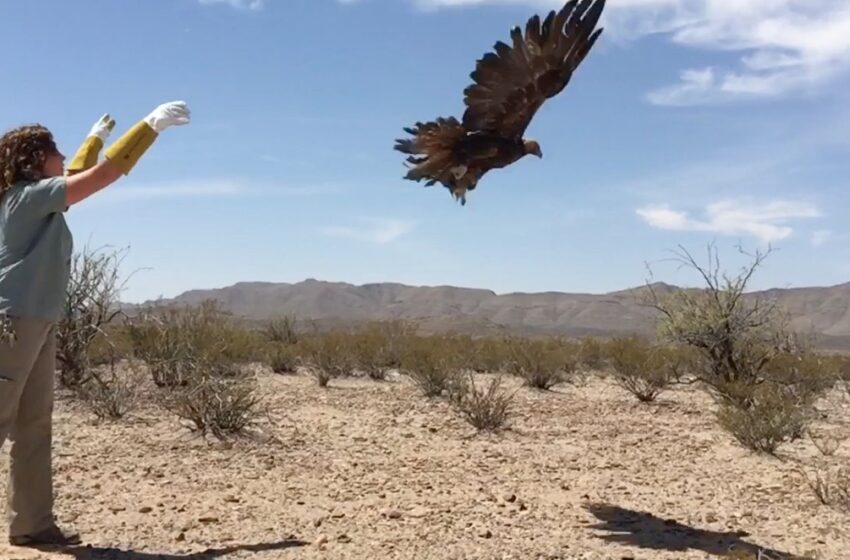 On Monday, the El Paso Zoo – along with the Gila Wildlife Rescue (GWR) – released a rehabilitated golden eagle in the Sierra Blanca area of west Texas as part of the Zoo’s wildlife conservation and rehabilitation efforts.

The eagle named Sierra was taken to the zoo in January after she was found with a broken bone in her wing and general weakness and dehydration.

El Paso Zoo veterinary staff provided medical care until the eagle healed and could be transferred for further rehabilitation and flight preparation by the Gila Wildlife Rescue in Silver City, New Mexico.

“Her fracture did not require surgery, and she healed with bandaging, rest, supportive care, and physical therapy,” said El Paso Zoo Veterinarian Dr. Vikki Milne. “Once the fracture healed in February we sent her to Dennis and Denise Miller Directors of Gila Wildlife Rescue in Silver City. They worked with Sierra in large flight cages, used for therapy, where birds can get their strength up and get back into flying condition.”

“We get 150-200 injured, sick, or orphaned hawks, owls, eagles and vultures per year, and last year approximately 90 were able to be rehabilitated and released. That is an excellent track record for a raptor rehab program,” said Dr. Milne.

The collaboration between the zoo and the Gila Wildlife Rescue on a raptor rehabilitation program and release is an example of how the zoo is committed to animal care. “This event is a culmination of the hard work this partnership does,” said Gila Wildlife Rescue Director Dennis Miller.

“Thank you to the El Paso Zoo for all the work they do and their support of wildlife rehab.”