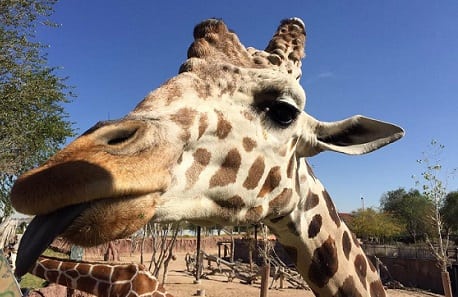 On Monday, the El Paso Zoo announced crews would begin replacing and increasing the number of shade structures to the giraffe exhibit starting August 1.

”We are excited to be able to begin this project to provide more shade for the Giraffes. The new shade structures will be wider and taller than the existing ones and thus will provide a larger area of shade for the Giraffes,” said El Paso Zoo Africa Collections Supervisor Amanda Leverett.

Construction will require zoo staff to take the giraffes off of exhibit. The giraffes will return on exhibit August 12 through August 26 then taken off exhibit until installation is done in September.

“The construction of these large structures requires contractors to have full access to the exhibit, so for everyone’s safety we will be unable to let any of our hoof stock roam the Upper Savannah during construction,” said Leverett.

In addition to providing shade, the structures will have a crank and pulley system that keepers can hang enrichment at the height of giraffes. The structures will also cast more shade for the smaller animals, including the Kudu and Addax.

This project demonstrates the commitment that the El Paso Zoo has to meet and exceed the standards of care set by the United States Department of Agriculture and the Association of Zoos and Aquariums.

The project is expected to be finished in early September.  For more information residents can visit the zoo’s Facebook page.