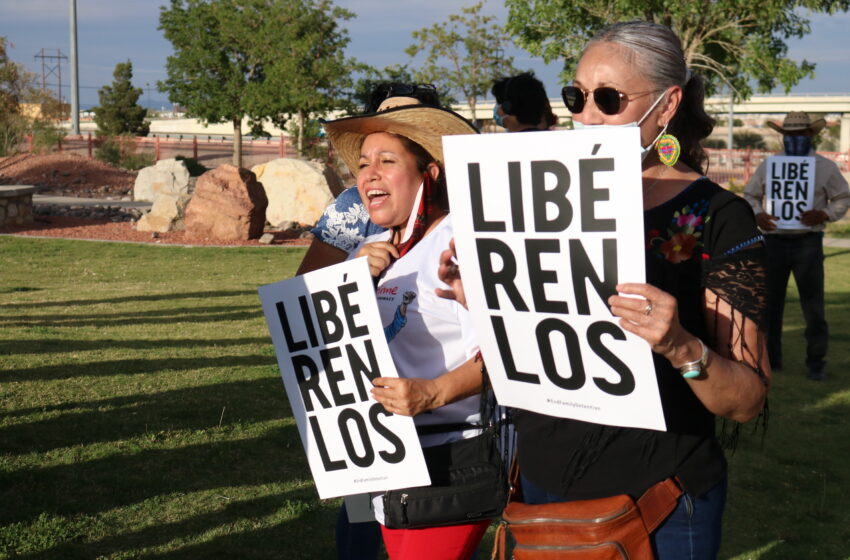 Earlier this week, dozens of El Pasoans demanded justice for unaccompanied children who have been placed at a detention center inside Fort Bliss.

Currently, a facility at the post is where the Biden Administration has sent over 4,000 unaccompanied migrant children, waiting to be reunited with their family members.

The protest took place on Tuesday afternoon at Jorge Almada Park, right across the freeway from Fort Bliss.

Protesters arrived at the rally organized by Border Network for Human Rights (BNHR), Coalition to End Child Detention and Reform Immigration for Texas Alliance (RITA) with only one thing in mind: advocate for liberation of the thousands of unaccompanied children being held at the post,  in the hopes of reunification of families.

As they were walking down Pollard Street, several members of the group greeted one another; some hugged, others preferred to keep their distance due to lingering concerns of Covid-19.

A common theme among the diverse group was a shared sentiment of betrayal from the current administration.

Protesters called out the Biden Harris administration for not “fulfilling their promises” after months of criticism and campaigning against Trump’s immigration policies.

The discontent rose, as media reports from Vice President Kamala Harris and her visit to Guatemala surfaced, where she asked Central Americans to “not come,” as the United States will “continue to enforce our laws and secure our border.”

“It doesn’t matter whether they are republicans or democrats they are treating the kids the same and it is an injustice… what these children need is be reunified with their families, be with their moms,” said Adriana Cadena a member of the Reform Immigration for Texas Alliance.

Fernando Garcia, the executive director of Border Network for Human Rights questioned why children have to stay in a military base.

“What type of danger do these children represent to be inside a base…We are asking to immediately close this detention center…this jail, to close it down,” said García, while protesters joined in an unified chant.

“I have children too,” El Pasoans sympathize with the cause

Lourdes Vazquez is a longtime advocate for the rights of immigrants asking for asylum at the border and is a volunteer with the Border Network for Human Rights.

Vazquez said her volunteer experience allows her to attest to the abuse and injustices Central American immigrants suffer inside detention centers.

As she said, she has children too and as a mother she will not want them to live “the same circumstances kids in those camps are exposed to.”

Two years ago, Vazquez hosted a Guatemalan family, a parent and a then 14 year-old teenager, after they were released from one of the detention centers.

“They spoke about how they were treated inside [the detention center] and now that there are kids there, who don’t have an adult, a parent who can take care of them… well I know they are treating the kids worse,”

Vazquez volunteered at the Centro Cristiano Pan de Vida in Juarez  to document the abuse Guatemalan, El Salvadoran, Honduran immigrants suffered as they stayed in Juarez as part of the remain in Mexico policy and those who have been deported.

“They have gone through awful stuff…five-year-olds telling me that immigration customs used to put them against a wall with their hands up and their feet wide apart for long periods of time without taking a sip of water,” said Vazquez.

One of the organizers and members of the Coalition to End Child Detention, Diana Martinez, stood in front of the crowd and shared an emotional testimonial.

Martinez said the young boy spent two weeks without having a case worker assigned inside Fort Bliss. The testimonial came from a family who was going through the process of sponsorship of the child, but it was impossible to get the boy’s whereabouts.

“They [the kid and his family] are facing a wall of bureaucracy, cold hearted bureaucracy… they don’t bother to tell [the family] where the kid is located,” said Martinez.

Martinez told the crowd of protesters and press that kids inside the base are under “suicide watch,” since they are losing hope after weeks of isolation.

Both pro-immigration advocates demand the closure of the camps and demand a “comprehensive” immigration reform that welcomes asylum seekers.

Youth supports the cause

As the El Pasoans elevated their voices, the sound of young voices was noticeable.

Children holding signs that say “liberenlos” (free them) and a sight of determination to fight for Central American kids. As previous demonstrations showed younger generations are aware of these situations and starting to show interest at an early age.

Sunrise El Paso, a youth-led group fighting for the liberation for the kids, claim the children are exposed to toxic chemicals and contaminants, as the sites are surrounded by “hazardous pollutants,” like radioactive metals, asbestos, explosive compounds, among others.

“There is evidence that there [are] higher toxic levels that are unhealthy for the children,” said Ana Fuentes, one of the main organizers at Sunrise El Paso.

The group believes that having children inside a military base paves the way for a lack of transparency in the practices in-base.

“[It] is federal property, so there is obviously more of a secretive element to it all, we can’t go there and see with our own eyes the conditions children are living in,” contended Fuentes.

The protesters hope the rally catches the attention of authorities and federal officials. The rally organizers also said they will continue to organize these rallies throughout the summer until they see a systematic change in the current administration.

The organizers wrapped up the protest with the message, “we must melt ICE.”