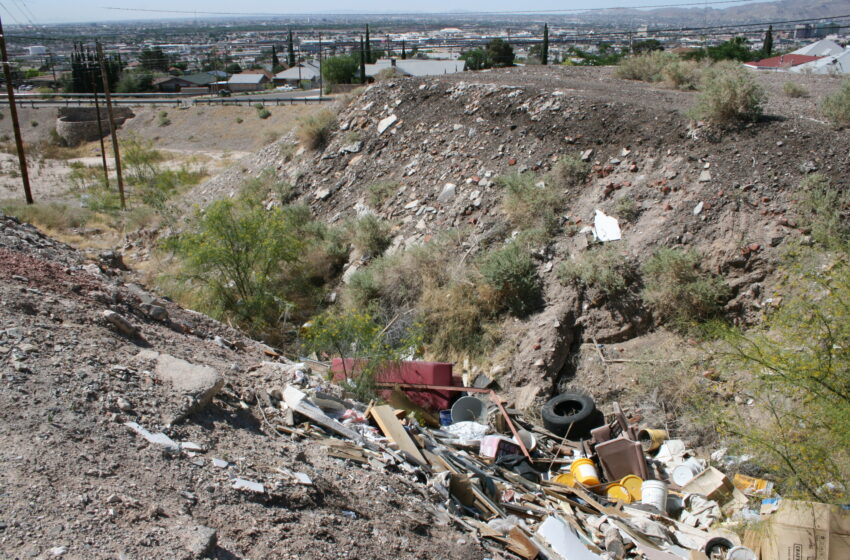 El Paso Water, the City of El Paso Environmental Services Department and the El Paso County Water Improvement District #1 (EPCWID #1) announced the kick-off of a public service campaign to bring attention to the City’s major illegal dumping problem and urge citizens to play a role in helping stop it.

More than 140,000 pounds of trash were illegally dumped in ditches, arroyos and across El Paso within the last year. Tires, mattresses, shopping carts and even toilets are among the most frequent items found and removed.

“Illegal dumping is a big problem in El Paso. Everybody needs to do their part to stop it,” said El Paso Water President and CEO John Balliew. “Our crews dedicate a significant amount of time and money to clearing out the trash. We could be using those funds to build more stormwater ponds that keep water off our streets.”

Balliew also pointed out that even a small amount of trash can clog drains and canals, creating a serious flood safety risk in a matter of minutes. He said the problem becomes particularly dangerous during the monsoon season and urged residents to call 311 to report illegal dumping.

“We all have to do our part to keep our city safe, clean and beautiful…But that requires us taking action and saying something when we see (illegal dumping),” Fenstermacher said.

To raise awareness of the problem, the new public service campaign will utilize radio, video, digital and outdoor media to get the word out.  To demonstrate how big the problem is, EPWater puts the 140,000 pounds of trash in context by pointing out it is equal to the weight of a herd of elephants.

At the kick-off, an elephant sculpture made out of illegally dumped trash was on hand, designed by local artist Jason Brewer. The sound and visuals of elephants are threaded throughout the public service campaign.

El Paso residents are urged to dispose of any large trash or waste at the approved Citizen Collection Centers throughout the city. The centers are located at:

Frontera pipeline replacement is on track