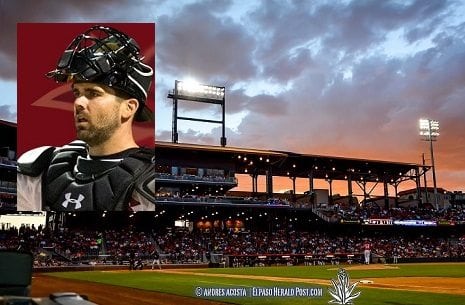 ROUND ROCK, Tx – El Paso Chihuahuas catcher/first baseman Brett Nicholas has been named the Pacific Coast League Player of the Week for April 16 through 22, the League office announced Monday.

Nicholas was the catalyst for an El Paso offense that averaged nearly eight runs a game. The 29-year-old led all of professional baseball (Minor and Major League players) with 14 RBI, hitting .370 (10-for-27) in seven games. Nicholas totaled 24 bases and recorded six extra-base hits, both of which matched the PCL best for that category.

He also hit four home runs and scored nine runs, totals that were second-most in the League during the week, while drawing as many walks (5) as strikeouts.

The Arizona native’s week began by mashing a pinch-hit home run, walking and scoring twice in an extra-inning loss, the Chihuahuas’ only of the week.

Nicholas capped his performance with three straight two-hit games, driving in a combined 10 runs, five of which came in the series finale at Reno on April 20.

He then drove in two runs at Las Vegas the following night and knocked in three against the 51s on April 22, while reaching base four times (two hits, two walks).

Nicholas is in his first month in the Padres organization after being acquired in a trade from the Rangers. In 16 games with the Chihuahuas, he has hit .386 (22-for-57) with six homers, 20 RBI and a 1.262 OPS. This is the fifth consecutive season Nicholas has appeared in the PCL, the previous four coming with Round Rock.

Nicholas spent the first eight years of career in the Texas system after being selected in the sixth round of the 2010 First-Year Player Draft out of the University of Missouri. This is his first career Player of the Week award.

In two starts, both against the Reno Aces, Hauschild worked 12.2 innings, recorded 15 strikeouts, didn’t issue a walk and had a 0.87 WHIP. He was the winning pitcher in both contests. This is his fourth career Pitcher of the Week and third with the Grizzlies. He previously claimed PCL honors in 2015 (August 3-9) and 2016 (July 4-10).