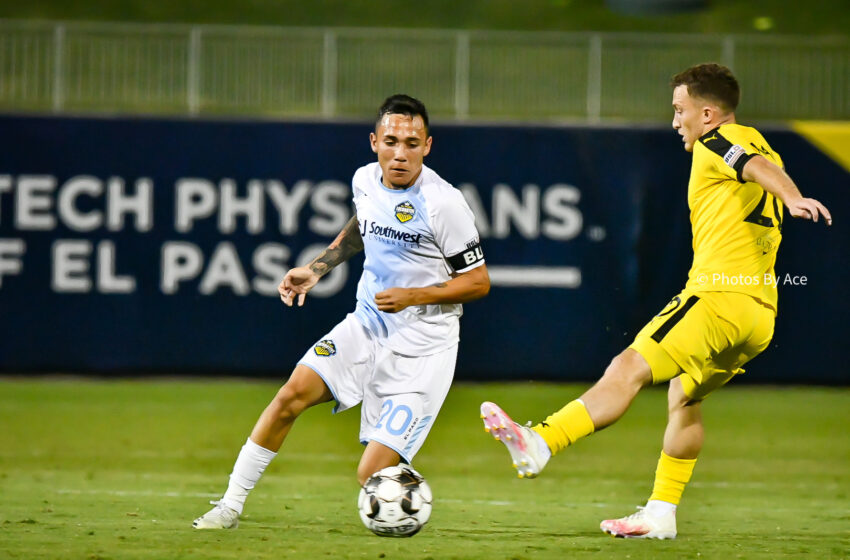 Pressing the attack while dominating control in the midfield, Chapa is a welcome return to the Locos Blue. | Photo by Andres ‘Ace’ Acosta – El Paso Herald Post

“It feels great coming back,” shared Chapa. “It’s my hometown, it’s my third year here and that’s something special for me because I have my family. I have my mom, my brothers, my wife, my son, and that just motivates me more to work even harder because they are always there to support me. It feels good to be on this team because of the players and coaching staff that we have. We’ve been in two finals and the next goal now is to bring that trophy home. Hopefully, we can do that as soon as possible and bring it home for the fans.”

“Chapa once again rose to the challenge in 2020…we strengthened the depth of our midfield going into this season, which made his job harder, but he backed himself once again and proved he belongs here at this level by forging his way into the lineup on a consistent basis. He added an end product to his game with more goals and assists, and his energy and ability to counter-press, win second balls and cover ground is a huge part of the identity of this team,” ,” started Head Coach and Technical Director Mark Lowry.

“We pride ourselves on intensity and selflessness in 2020, and Chapa embodied that, which is why we want him here for a long time. He has the personality of a Locomotive player; the attitude and desire that I want this team built around. Chapa is El Paso. He is what this City and Community stands for; honest, resilient, tenacious, and with a genuine passion and love for the people around him.”

Herrera, 24, began his professional career with Locomotive FC in its inaugural 2019 season, making a positive impression. After 27 matches played with 12 starts in 2019, Chapa broke into a regular starting position in the Locomotive second season, making nine starts in 12 appearances during the abbreviated year.

Chapa found his first professional goal in his second season during the 4-2 win over Colorado Springs Switchbacks FC. In the 66th minute, the El Paso native linked with Nick Ross to find the back of the net before pairing with Omar Salgado in the 68th minute to quickly find another goal.

Pressing the attack while dominating control in the midfield, Chapa is a welcome return to the Locos Blue.

Herrera will continue to make waves when he returns to the field for the Sun City next season. El Paso Locomotive is currently working on additional player announcements for the 2021 season and will announce the renewals and new signings once they are confirmed.

El Paso Locomotive FC’s roster as it currently stands headed into the 2021 USL Championship season, listed alphabetically by position, is below:

El Paso Locomotive FC returns to action for its third season in the USL Championship in 2021, and fans can lock in their seats by going online or calling/texting 915-235-GOAL