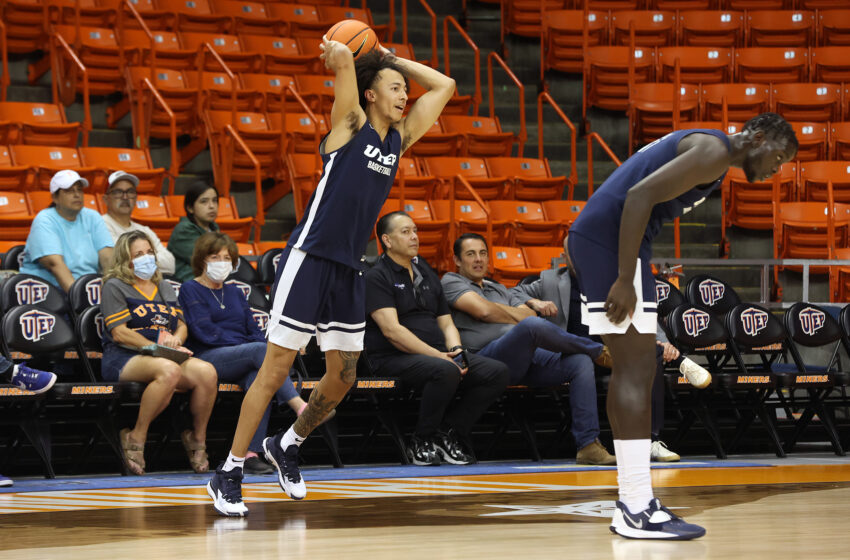 (UTEP) Redshirt-junior guard Emmanuel White can’t wait for the 2021-22 season to get here. The self-described “Three and D” style of player, it’s been a year-and-a half since White last was on the court, and understandably he’s anxious to get going.

“I’m very anxious (to play),” White said. “I haven’t played a game since 2020. I’m really looking forward to getting back out there, especially since it’s going to be my first game playing for UTEP. I’m definitely excited for that.”

The Katy, Texas, native started his career at Coastal Bend College, averaging 13.3 points in 2019-20 before transferring to UTEP for the 2020-21 season. He then redshirted last year, but White knows what he hopes to do.

“I’m looking forward to getting some steals, making some threes,” White said. “I just want to live up to my potential, and help the team win as many games as we can. I’m a ‘three and D’ type of player. I can shoot and I just play really hard.”

UTEP head coach Joe Golding is on board with White being that type of player.

“We want him to hit wide-open shots, keep the ball moving,” Golding said. “We want him to get after it defensively and play our style. He’s doing a good job of that, and is off to a good start. He’s trying to earn his opportunity. He needs to take advantage of his opportunities when he gets them.”

He’s done a good job of keeping himself ready for whenever Golding calls his name.

“I’ve stayed in the gym, getting in there as much as I can,” White said. “I’ve also been watching film to stay sharp and mentally ready.”

White has also picked up yoga during his hiatus from the basketball court.

“I got into yoga a year and a half ago,” White said. “I’m stretching way more. It’s definitely helped me on the court too.”

His efforts have drawn the attention of Golding.

“He’s very consistent,” Golding said. “What I’ve liked about him from day one is he’s really been coachable, he’s bought in to what we’re doing. He knows exactly what his role should be, and he does it really, really well. I’m excited about him, and what he brings to our team.”

It’s also been beneficial for White to be reunited with a long-time friend and current Miner, Jamal Bieniemy.

“I’ve known JB (Jamal Bieniemy) since first grade,” White said. “We went to high school together, led our team to state. To get to play together in college is great. Now that we’re at the next level, we’re trying to take it as far as we can.”

White knows that one day his playing days will come to an end, but he’s already got a plan in place.

“My major is kinesiology,” White said. “One day I want to be a physical therapist working with pro athletes.”

For now, all of his focus is on the upcoming season. But he appreciates as well that he’s living out a lifelong dream of playing college basketball, being sure to credit his family for their role in his growth and development.

“My parents, and my little brother too, showed me persistence in chasing your goals,” White said. “I knew (he could play at the college level) around middle school or early in high school.”

And he’s enjoying every moment of it so far.

“It’s been great (playing with Coach Golding),” White said. “He’s teaching us the right stuff. He’s a good coach, and I’m excited about the journey that we’re about to go on.”

The 6-5 guard is soft spoken and chill off the court, but he can flip the switch when it’s time to get going on the court. He also credits Golding for his leadership to get the guys going and with changing the culture.

“Coach Golding sets the culture for the type of team that we’re going to be,” White said. “We’re going to bring energy every day. It’s hard not to feed off of that. I know the Don is going to be going crazy. You just have to flip that switch. Playing for Coach Golding, it’s like it’s naturally in you. He’s good at making sure you’re playing hard all the time.”

Most players dream about knocking down a game-winning basket, but if it were up to White he’d take a charge to win the game. His explanation is matter of fact.

“That’s just our culture here. Coach Golding is big on taking charges so I’d definitely do that.”

With the 2021-22 season now here, any and everything is possible for White and the Miners.