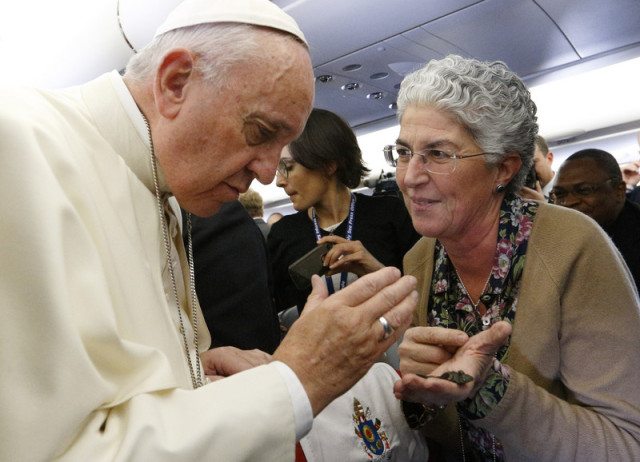 During the less than seven-hour flight, Pope Francis told reporters the only thing he was worried about were the mosquitoes, and after greeting each of the 74 reporters individually the pope took the microphone again and said, “Protect yourselves from the mosquitoes!”

Speaking to a small group of reporters as he made his way around the plane, the pope also confirmed he would visit four cities, including Ciudad Juarez on the U.S.-Mexican border, when he visits Mexico in February.

In an article by Joshua J. McElwee in the National Catholic Reporter, details of the trip were shared:

“While Mexican church and national officials have both publicly said the pope will visit their country Feb. 12-20, the Vatican has yet to officially confirm the voyage. An advance team from the Vatican had also been reported to have been scouting out Juarez as a possible location during the trip.

Francis told reporters he plans to start the Mexico trip in the south of the country and then work his way north, visiting different towns along the way.

The visit to Juarez will certainly carry much symbolism. Before his September trip to the United States, the pontiff had said he had wished to visit a town on the Mexico-U.S. border during that trip but was unable to make the arrangements work.”

In his brief remarks to the whole group, the pope did not mention the security concerns or the travel advisories issued by many governments after the terrorist attacks Nov. 13 in Paris.

To read more about his visit to Africa, click HERE  Author: Cindy Wooden

The Catholic News Service and  National Catholic Reporter contributed to this story.