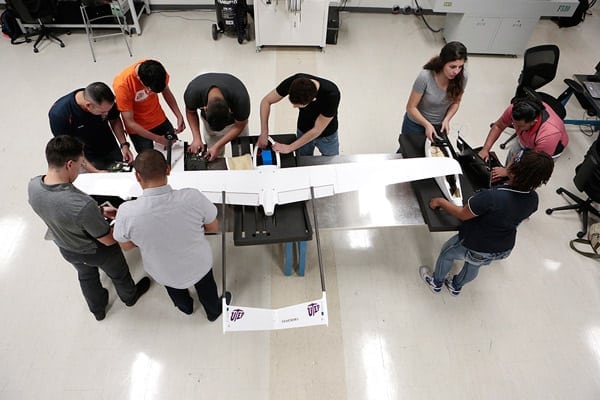 Engineering and computer science students have had a hand in The University of Texas at El Paso’s ascent to the forefront of unmanned systems technology.

Since January 2018, cSETR has led a team of leaders from El Paso County, the City of El Paso, El Paso International Airport and many other regional government entities in a partnership with California-based AirMap, a global airspace management platform for drones, for the system’s implementation.

The students’ work has been vital to the overall effort, which is geared toward enhancing public safety, said Michael McGee, Ph.D., cSETR senior research associate.

“This team of faculty and students from many different disciplines within UTEP is on the leading edge of the unmanned aviation industry,” McGee said. “The capability of the unmanned systems they are developing is absolutely impressive and is more advanced than any systems available commercially. Their work is establishing UTEP and El Paso as a national leader in this new industry.”

For students, the opportunity to contribute to such a critical infrastructure project has proved rewarding.

“It’s an honor, for sure, to be able to participate in a project such as this one,” said Cesar Valenzuela, a senior electrical engineering major. “It’s one of the greatest things I’ve ever done as a student.”

Valenzuela, along with other electrical engineering students, has been charged with modifying drones to ensure they can be outfitted with devices that provide connections to servers and network antennas. These drones will assist UTEP researchers to track low-altitude traffic and ensure the UAS Traffic Management (UTM) system is operating correctly and efficiently. For his part, Valenzuela said he has spent much time wielding a soldering iron as part of his work on the project. More importantly, he said he has learned the value of interdisciplinary work.

“It’s nice to be working with other departments besides electrical engineering,” Valenzuela said. “We’re learning to collaborate, communicate and coordinate in order to achieve a common goal, which is flying the drone.”

One of those collaborators is Andrea Villela. Villela is a senior mechanical engineering major. Her student group has focused on redesigning the base of cSETR drones to make them viable to deliver a payload and carry a range of sensors for research. These modifications allow UTEP researchers to identify potential problems for devices while they are in the air as well as provide other local government agencies with a view from above to help them meet various ends.

“I think that there’s a lot of new development and improvement in the aerospace industry,” Villela said. “I think that’s why a lot of mechanical engineers tend to be a part of the cSETR program. They want to be a part of the difference it is making in this world. I think it’s a great experience to have some hands-on work. I really like designing, manufacturing and being able to create something that the drone needs. It is something that is going to make an impact.”

“Through the UTM, we get experience in a real-world project. That’s a plus,” Lopez said. “This experience will help me in my professional career. It has exposed me to things I wouldn’t have been exposed to.”

In the end, the aim of the UTM system is enhancing public safety, McGee said.

Drone use by public users throughout the United States has risen significantly during the past few years, a trend that is expected to continue. There are currently more than 1,000 drones in El Paso registered with the Federal Aviation Administration. The actual number of drones in El Paso is likely much larger since not all owners register their aircraft with the FAA.

The primary focus of the UTM system is to increase safety throughout the Paso del Norte region. Mid-air collisions between manned and unmanned aircraft in low-altitude airspace are a significant concern. This UTM system will allow for increased situational awareness for pilots of manned and unmanned aircraft, thus increasing community safety. The secondary focus of the UTM system is to facilitate safe and efficient drone operations, increasing public safety, and attracting more high technology opportunities for UTEP students.

“The efforts to develop advanced capability long-range and long-endurance drones to support research and the further implementation of the area unmanned traffic management system will continue to accelerate at UTEP,” McGee said.