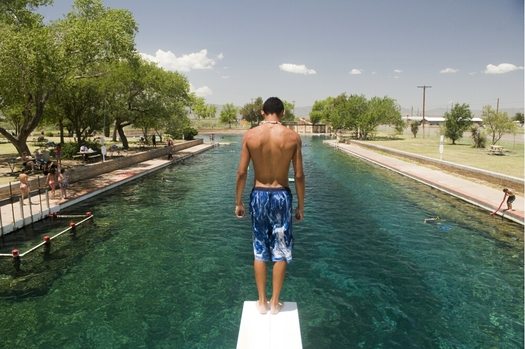 ALPINE, Texas – Environmentalists are deeply concerned over plans by a Texas oil company to drill thousands of wells near iconic Balmorhea State Park in the Big Bend region.

Houston-based Apache Corporation has leased 300,000 acres surrounding the environmentally sensitive park and plans to use fracking techniques to search for oil and gas deposits.

Robin Schneider, executive director of the Texas Campaign for the Environment, said despite assurances by both Apache and state officials that the park’s environment will be protected, state regulators can’t always be trusted.

Balmorhea is a 46-acre state park built by the Civilian Conservation Corps in the 1930s. The park, surrounded by miles of arid desert, is a fragile oasis with a freshwater spring, desert wetlands and a popular spring-fed swimming pool. There’s evidence that both Clovis and Apache tribes lived near the springs more than a thousand years ago.

Schneider said people who now live near the park, many of whom count on it for their livelihood, have major concerns over the impact of fracking.

“One is that the water coming out of these springs is contaminated and then the other factor would be if so much water is used by the fracking process that there are issues with the supply of water,” she added.

She said more than 6,000 West Texas residents have signed petitions opposing the fracking.

“This is a critical resource for the health of the community, bringing in tourism and agriculture,” Schneider said. “Both of those industries are threatened, not to mention the critters that live in the springs and the people that swim in it and use it.”

Schneider added that a recent study of fracking sites in Texas found toxic chemicals such as chlorinated solvents, alcohols and aromatic compounds had leached into nearby lakes and streams.