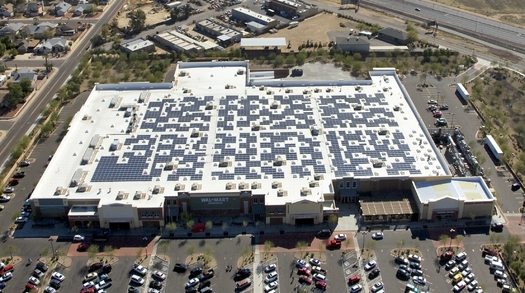 PHOENIX – Environmentalists are pushing big-box retailers and shopping malls to use their rooftops to generate solar power.

Environment Arizona, part of the Environment America coalition, says installing solar panels on those flat, mostly empty rooftops could not only cut the stores’ power bills, but also eliminate a lot of carbon from the atmosphere. Jenifer Wong, a campaign organizer with Environment Arizona, says there’s a lot of rooftop space available.

“We released a report that looks at the 96,000 big-box retailers, shopping centers and grocery chains around the nation,” she says. “And found there is 4 billion square feet of roof space that could be put to good use generating clean energy.”

Wong says those rooftops could generate enough power each year to run about 7 million average homes, and take about 57 million tons of carbon out of the atmosphere. She adds it would also save the stores 42 percent on their power bills. Wong says the sunny climate in Arizona means the stores here would do better than the national average.

“In Arizona alone, if we look at all the big-box stores, they can offset 51 percent of electricity usage and save $220 million on annual electricity spending,” she says. Retailers such as Walmart, Costco, Kohl’s, and IKEA have already made significant investments in solar panels.

Wong says her group is currently focused on getting Target, with some 2,000 stores nationwide, to increase its use of renewable energy.