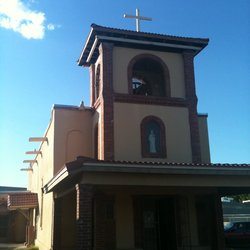 After rumors started springing up on-line last week about the future of the San Jose Church, the Diocese of El Paso sent out information to set the record straight.

The Lower Valley Church, located at 8100 San Jose Road, is sandwiched between Yarbrough Drive and the Union Pacific Railroad’s main line.  According to a release from the Diocese, the cracks spotted by some were on the surface of the church’s stucco, and not structural in nature; however they decided to call in an inspector just in case.

“The cracks are likely due to water which got in between the Adobe building and the stucco exterior,” the on-line release stated, “the inspector did not find issues inside the structure of the church and the church was not condemned…Mass was held inside the parish on Saturday and Sunday following the inspection.

According to the release, the study would take two to three weeks to complete. While the inspection is underway, Mass would be held in the parish hall, where parishioners moved various articles needed for the services.

In conclusion, the release stated, “Father Alcocer’s absence from the parish during this activity (he’s on a planned vacation) has likely sparked the feelings of uncertainty and misinformation that are being shared. Parishioners should know that the Diocese has been working with Fr. Alcocer through this process and we continue to work together moving forward.”