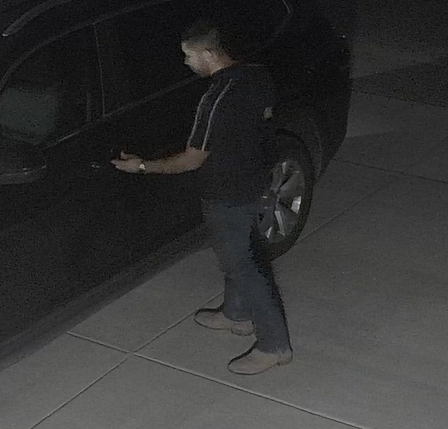 Monday afternoon, officials with the El Paso County Sheriff’s Office (EPCSO) announced that they are requesting assistance from the community in identifying an unknown man, wanted in connection with a criminal mischief investigation in a Far-East El Paso neighborhood.

According to the EPCSO, on May 24, 2021, Sheriff’s Office deputies were sent to the 300 block of Golden Rise, just of the Eastlake and Rojas intersection, in reference to a criminal mischief call.

“The victim advised deputies an unknown individual attempted to enter their residence but was unable to make entry,” EPCSO officials share. “The same individual is seen in video surveillance attempting to make entry to the victims’ vehicle. The offender was unsuccessful but in the process damaged the passenger front door.”

Investigators say the unknown man appears to be a Hispanic male, with short hair and a beard; wearing a dark-colored shirt, jeans, and boots.

The Sheriff’s Office would like to remind the public to lock their vehicles, trunks, or tailgates.

“An unlocked car is an open invitation to a thief, take the keys with you and close all windows,” EPCSO officials add. “Remove, secure or hide cellphones, stereos, valuables, wallets, purses, and packages.”