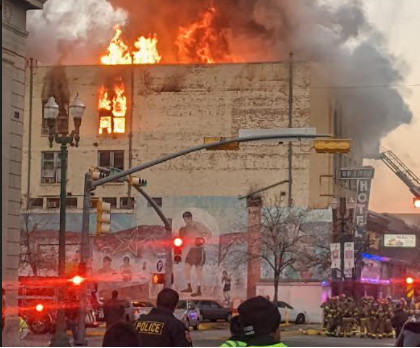 El Paso Fire Department (EPFD) was on the scene battling the flames that broke out at around 5:30 p.m.  Witnesses shared footage of the smoky fire on social media as crews began to douse the flames.

According to Historian and El Paso Preservationist Max Grossman, the De Soto hotel was originally called the Great Norther Hotel when it opened for business in December 1905. the original owners were D.P. Stewart and J.J. Crawford, who were local contractors and builders.

Grossman added that the 2017 County architectural survey determined the De Soto – a load-bearing brick building – to be eligible for the National Register of Historic Places.

No injuries were reported and surrounding buildings were evacuated.

For their part, city officials were “appalled and disappointed” by Friday evening’s fire, prompting a news release.

“We believe it extremely unfortunate to see this building be destroyed by a fire, just as we were bringing it back to life with the help of a private partner who was eager and willing to re-activate the blighted hotel and work to preserve the iconic murals on the western side of the building,” said City Manager Tommy Gonzalez. “This restoration was one of three active historic preservation projects the City has been working to incentivize. We plan on aggressively completing the historic preservation of the two other structures in downtown.”

Under the terms of the agreement, the property owner would have made a minimum $1,200,000 investment and the City would have supported the project in the form of property tax rebates, construction materials sales tax rebate, and permit fee rebates generated from the building improvements.

Additionally, the City and the Downtown Management District, jointly provided support in the form of a commercial façade, pedestrian corridor, and signage grant to assist in renovating the exterior of the building.

Now EPFD begins their investigation into the cause of the De Soto fire, and business owners begin the long process of cleaning up and rebuilding.

On Saturday, the Mayor released the following statement:

“I am reminded daily of the courage and bravery of all El Pasoans. While I am deeply saddened at seeing a piece of El Paso history destroyed, I am profoundly grateful that we awake this morning without any loss of life due to this tragedy. We are indebted to the members of our extraordinary El Paso Fire Department who faced this emergency, and who always stand ready to protect us. Downtown is the heartbeat of this community, and it will continue to thrive with the ambitious historic preservation projects underway. We are reminded once again during this Pandemic to appreciate everything around us, but most importantly the lives of our fellow citizens.”

EPFD Fleet honored as one of the...