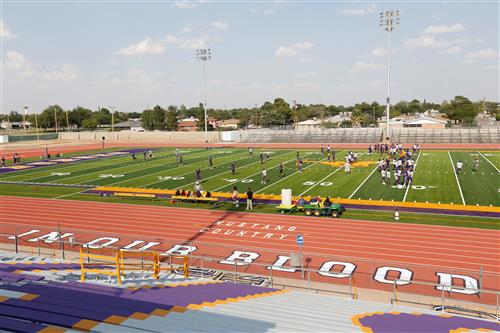 And when the student athletes call their field cool, they mean it literally. The cushier and cooler field is made with coconut fibers which is 40 percent cooler than previous turfs and an extra layer included within softens it for reduced knee and head injuries.

“Your feet are not burning up and don’t have to wear two pairs of socks anymore,” said Burges junior Michael Amezaga. “There’s no heat at all. You used to be able to see the heat rise when you looked across the field and you don’t see that anymore.”

Amezaga also likes the fact that the new field brings back the traditional mustang design, putting to bed forever the Denver Bronco-like design that existed for a decade.

“Now we have a real running mustang not a bronco anymore,” he said. “The field has been restored to how it should look.”

The newly rolled out turfs at the three high schools represent the first of 10 fields to be redone through the Bond 2016. All high schools will have their fields replaced under the bond program.

Beyond the safety upgrades, the new fields replaces patchy and pockets of torn up turf.

“They were in terrible shape,” Kennedy said. “We’re excited to be able to make these improvements for our kids.”

The cooler fields keep players better hydrated, and even impact other aspects of practice.

“The temperature factor is very important,” said Burges head football coach Neil Routledge. “We’re able to do things that involve tackling to the ground and we feel a lot safer about it because it isn’t as scorching hot as the old turf.”

The new football field and track upgrades inspired the alumni to add a fresh coat of paint to the trailers and ticket box.

Emblazoned on the the track are mustangs, and a tribute to the 2012 4×4 state championship boys track team, led by rookie Green Bay Packer Aaron Jones.

“No one had done it before and after a lot of years coaching track, I can see how special that the situations was,” Burges head track coach Manny Herrera said. “So when we had the track redone, we wanted to make a statement to show it was a meaningful time in our heritage not only for us but for the City of El Paso, too.”

Across town at El Paso High, coach Robert Morales sees his players inspired by their new field – the perfect compliment to the century-old school’s legacy and beauty.

“The color coordination and layout just puts a giant exclamation mark on the most beautiful high school football stadium in the country,” Morales said. “Our old turf was very dirty, ugly, and all patched up. We called it the ‘Field of Patches’ instead of the ‘Field of Dreams.’ Now our athletes play on it feeling they will have an edge on the competition because of all the pride they have in our facility.”

Athletic projects make up $32 million of the overall $668 million bond. Projects include: includes replacement and installation of turf at all high schools, renovations of track and tennis courts at eight high schools, court and field lighting and shading and court renovations at various playgrounds.

The renovations make a difference throughout the District and give student athletes a chance to play on a level playing field no matter where their game is in EPISD.

“It’s big for our District keep up with the other districts,” Routledge said. “Other districts have newer facilities so now we can retain the kids have and maybe attract some kids from other districts