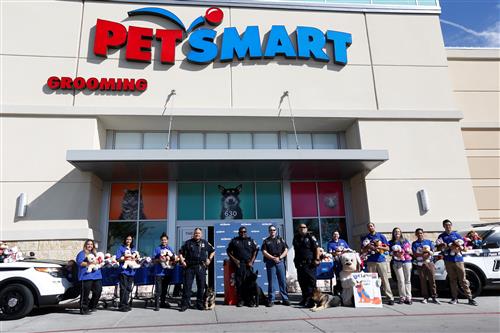 PetSmart can’t provide live puppies to help sick children and the victims of crime, so they instead donated hundreds of stuffed animals to the El Paso Independent School District Police Services Department to distribute to those in need.

Officers from EPISD’s K-9 unit picked up more than 1,100 stuffed animals donated by customers of the store in the Fountains at Farah.

Giant bags and several shopping carts full of soft, cuddly toys sat in front of the story as the officers and their canine partners posed for pictures with the staff before hauling them off. The store hopes at least another 900 are donated through the remainder of the holidays.

“It was amazing when they told us the amount of stuff animals they collected,” said Officer John Dominguez. “We’re very thankful to PetSmart and their staff. This is going to make a difference.”

EPISD Police will be taking the donation to the Child Advocacy Center, the Children’s Hospital at Providence and Lee & Beulah Moore Children’s Home this holiday season.

“We also will be providing toys for children who are victims of crimes,” Dominguez said. “Every unit will have a couple toys in the police car to give to children when there is need. It is going to make a difference to them – just to put a smile on their face and know we’re there to help. It will give them security and make them feel more safe.”

Shauntel Caballero, associate store leader, said each store does a similar drive but the benefactors vary. EPISD Police purchases their canine supplies from Pet’s Mart at the Fountains, so the partnership seemed to be a perfect fit.

“The customers love it,” Caballero said. “They think it’s a great idea and some even buy one of each of the five stuffed animals to donate.”

The stuffed animals range from $5 to $8.99 and have been on sale since early November.

“The sale of the stuffed animals not only goes to the EPISD Police, but $1 of it goes to our charity fund,” Caballero said. “We deal with multiple shelters. Non-kill is our goal, so $1 goes to the charities for food and anything the shelters need to keep the animals alive.”