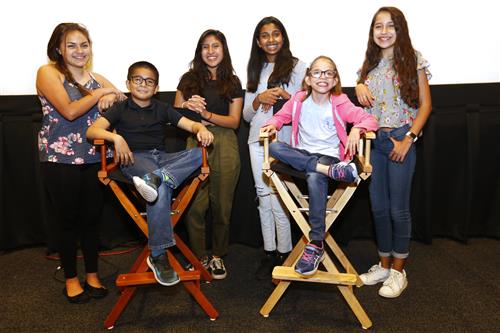 Six EPISD students will share the stage with local and national leaders to share their ideas and present their platforms during the 2018 TEDxElPaso conference Saturday at the El Paso Museum of Art.

The six students, who earned their spot on the conference by presenting their ideas before a panel earlier in year, will share the stage with well-known speakers like Congressman Will Hurd, advertising executive Leslie Wingo and muralist Cimi Alvarado.

Representing EPISD at TEDxElPaso are:

The students are part of EPISD’s emerging TED Ed Clubs, which help prepare students to become public speakers and present ideas in the style of the world-famous TED Talks.

“Our objective for TEDxElPaso is not only to contribute to the global clearinghouse of free knowledge, but also to inspire you to make a dent in the universe and leave your own unique footprint,” said curator David Michael Jerome, who called the event a day that is devoted to ideas.

On Saturday, EPISD students will speak on a range of topics that include the role bees play in our environment, the importance of listening to children and happiness in our lives.

“My TED Talk is going to be about how I feel about the disadvantages and advantages about me personally being the middle child,” Coldwell’s Kiyoshi Ito said. “So it’s sort of like I’m interviewing myself and I’m telling it to other people. I learned how to be a more fluent speaker.  Being in TED Ed has also helped me to get over stage fright and be able to talk in front of a big crowd.”

The TED Talk Club also taught his classmate, Mia, how to project her voice and become a better speaker.

“I’m going to be talking about the voice of the young and how politicians or even your mom or dad should be listening to what you have to say because we are part of this world for a reason,” said Mia, also a Connections student at Coldwell.

Her talk required some research and practice to ensure her voice could be heard.

“When I got into it I didn’t really know much about it so I watched the news and I looked at websites,” she said. “I was really shy and I would talk like really whispery. To practice, they had the class stand in the back of the room so I had to be louder and show my voice because my TED Talk is about my voice.”

Mia and Kiyoshi’s teacher Christina Mier has seen how much the students have grown from participating in TED Talks.

“The program provides them a platform. These students have stories to tell and it is amazing how they really do want their voices to be heard,” Mier said. “Programs like TED Talks develop their presentation literacy and gives them that opportunity to just organize themselves, improve their skills and really just put it all on the stage.”

EPISD started the TED Ed Clubs in 2016. In 2017, 13 campuses from elementary through high school participated in the program with the eventual goal of establishing a club at every EPISD campus.

“The TED Ed Club curriculum matches components of the Active Learning Framework and New Tech,” said Esther Hughes, a facilitator for innovation who also coordinates the clubs. “It inspires members to work together to discuss and celebrate creative ideas.”

Last May, the students in the clubs presented their TED-style talk in front of a crowd and were rated on a variety of categories including delivery, idea, enthusiasm and audience awareness by representatives from TEDxElPaso. The top presentations were selected for this week’s talks.

“We are so grateful to TEDxElPaso for this partnership,” Hughes said. “Students who are selected to present are given coaching opportunities on how to present their talks.  They are exposed to influential civic- and business-minded leaders in the community who, in turn, always express what amazing students we have here at EPISD.”