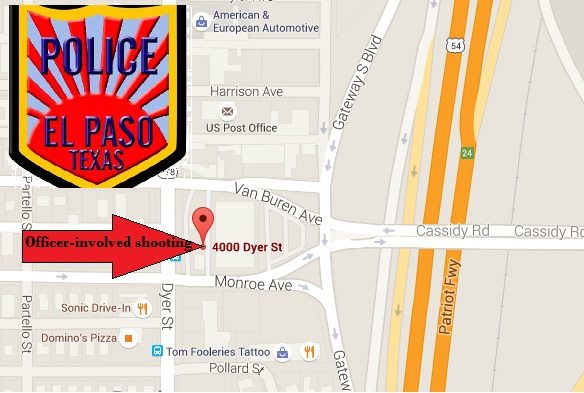 The El Paso Police Department’s Crimes Against Person’s Unit, along with the Texas Rangers, continue to investigate an officer-involved shooting that occurred on August 6, 2015.

Investigators from both agencies, to include the El Paso Police Department’s Shooting Review Team, along with the El Paso County Medical Examiner’s Office are conducting this investigation.

EPPD officials say the incident began when an on-duty uniformed officer, identified only as a 4-year veteran of the force, saw a vehicle traveling along the 4000 block of Dyer with a headlight that was out. The vehicle pulled into a parking lot and the officer then drove in and exited the patrol car.

As the officer approached the car, officials say he “observed several individuals exit the vehicle and began to communicate with one of the occupants.” At the same time, the officer also saw a man, later identified as 22-year-old Charles Bertram, armed with a gun.

According to police, the officer then turned his attention towards Bertram and fired his pistol.  The news release on the incident adds that, “the officer say Bertram run from the scene and gave chase.

Investigators confirmed that rounds were fired from the officer’s gun as well as the gun that Bertram was holding. Officials say that Bertram died in a nearby parking lot.

Per EPPD regulations, the office is currently assigned to administrative duty while the investigation takes place. Department officials add, “Once [the investigation is] completed, the facts of the case will be forwarded to the District Attorney’s Office for review.”