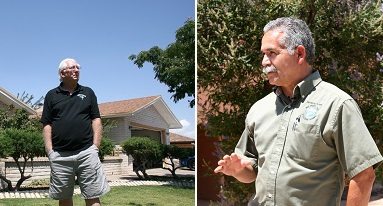 As part of its 25 Years of Conservation campaign, El Paso Water Utilities (EPWU) will recognize both customers during an El Paso Chihuahuas game at Southwest University Park this month.

Both McLeod and EPCC were selected as heroes based on a review of nominations and validation of water consumption records.

The Northeast campus has implemented xeriscaping and desert plants native to the El Paso area, in addition to drip irrigation and rain collection systems.

“Simple steps can yield extraordinary results with just a little bit of effort, said El Paso Water Conservation Manager Anai Padilla. “Everyone can be a ‘Conservation Hero’ and a thoughtful steward of our water resources.”

He was proud that the campus is being honored as a 2016 “Conservation Hero.” That honor is part of a campaign by El Paso Water Utilities to highlight customers who have implemented water smart habits and decreased their water use.

It was a warm Monday morning with a forecast that was well on its way to triple-digit temperatures, but that didn’t keep Lobato, who is the physical plant executive director for EPCC, from talking about how the Northeast campus is conserving water.

From installing a drip irrigation system, to rain harvesting and planting desert willows, cacti along with other native plants, Lobato said they have done their best to stay true to the region’s desert vegetation.

The campus’ effort to reduce water consumption in the last several years was the reason it was selected for the recognition. The recipients were selected based on a review of nominations and validation of water consumption records.

“We have a wide range of responsibilities. Water conservation is important because it’s a scarce resource in the Southwest,” Lobato said.

For the “Conservation Heroes,” program, El Paso Water Utilities officials looked at all of EPCC’s campuses. The Northeast campus was the one that showed the greatest decrease in water consumption.

Of the people who entered theprogram, McLeod showed the greatest drop in usage—reducing his annual water usage from 185,529 gallons in 2007 to 165,330 gallons in 2015—that’s an 11 percent decrease in seven years.

Transmountain groundskeeper Raul Lucero said foreign vegetation that once occupied the landscapehas since been replaced. There’s also been a decrease in the number of watering days. Campus officials have repurposed rain water by collecting it into water tanks to use for irrigation.

“To be honest, I never expected this to happen because it’s part of our job to do that,” Lucero said. Ebonee Norris, a student at the Transmountain campus and editor of the student paper Tejano Tribune, toured her school while Lobato showed all the water-saving measures that have been implemented in recent years.

She said she was proud to see her campus take the initiative to conserve.

“I was very impressed by the fact that my college was being acknowledged for something like this. I didn’t even know that they were taking steps toward conserving water,” said the 26-year- old college student. “I’m very proud to be a part of the college that cares so much about the environment.”

EPCC officials said they are going to continue to save water and energy wherever possible. The campuses are designed and maintained with preservation in mind. “Not only is it a conscious responsibility it’s everybody’s responsibility to conserve and preserve water,” Lobato said.

“Because of water conservation efforts of residential and commercial customers like those we are honoring today, El Paso has successfully reduced its per capita water consumption by 30 percent since the early 1990s,” said El Paso Water President and CEO John Balliew.  “We also wish to thank the many El Pasoans who have cut water consumption but remain unsung conservation heroes.”