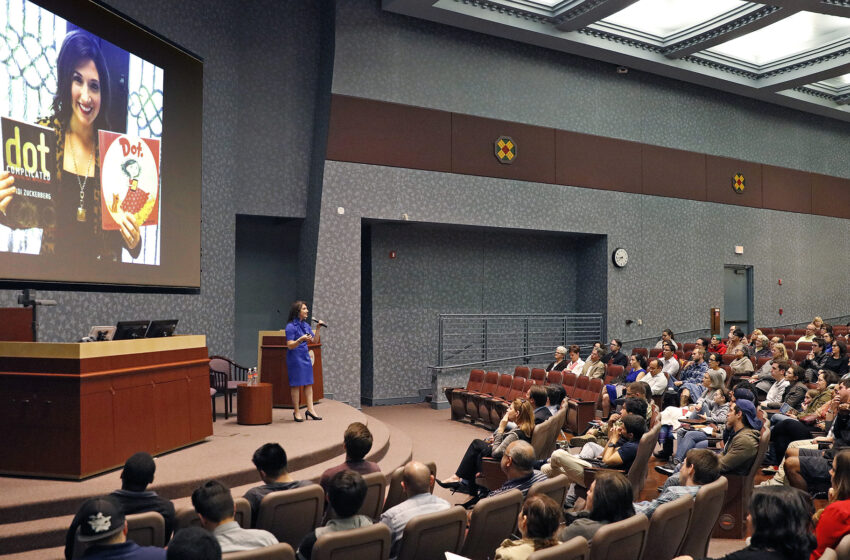 On Tuesday, Zuckerberg, creator of Facebook Live and sister to Mark Zuckerberg, spoke at the University of Texas at El Paso to more than 400 students and members of the community.

During her visit, Zuckerberg discussed the increasing impact technology has in our lives, tips for balance between technology and our lives and encouraged everyone to dispel any fears of failure. Failure – Zuckerberg said – is part of learning how to succeed.

“We had a poster in the lobby of Facebook that said, ‘Fail Fast,’ because no one should be afraid of failure,” Zuckerberg said. “You should just learn from it and not do it again.”

Zuckerberg’s visit was sponsored by the Jewish Federation of Greater El Paso, the Inter-American Jewish Studies Program and hosted at the university’s undergraduate learning center.

Ezra Cappell, English professor at UTEP and the director of Inter-American Jewish Studies Program, rallied for Zuckerberg to visit the university. Cappell said he invited Zuckerberg to speak at the university after his children read her children’s book “DOT” and learned of her wide range of successes and talents.

“It shares an important message on children and how they should limit their screen time and go out and explore the world around them,” Cappell said. And I believe that as a parent and member of society a large portion of our lives we are surrounding by screens….And I learned about Randi and her far wide range of talents – how she was a successful businesswoman, nominated for an Emmy and starred in a Broadway musical – and there aren’t that many people who have that kind of resume.”

Zuckerberg touched on her time at Facebook and how a relatively fun session, called a Hack-A- Thon, changed the idea of live broadcasts on Facebok. The Hackathon was an annual event in which employees of Facebook pulled an all-nighter to work on a project that was not related to work.

Through these session, some innovative ideas came and some became features on the Facebook network.

Between 2009 and 2010 – Zuckerberg began to think about the role of live content could have on social media.

“So I thought I could create an entire news network called Facebook Live, and it was going to be amazing.”

However, only two people – her parents – watched her first attempt with Facebook Live – and Zuckerberg left the Hackathon at 1 a.m. believing the project was a failure.

But it wasn’t over. In fact, two weeks later Katy Perry ‘s manager reached out to Zuckerberg and requested the use of Facebook Live to announce Perry’s world tour.

“And I wanted to apologize to her and tell her it was a failed project – but then I thought what would my male colleagues do? They would want to meet Katy Perry,” Zuckerberg said. “So, I said that Facebook Live was a very reputable TV show and that’s where Katy Perry should announcer her world tour. And then I panicked and then I prayed and luckily – we have a lot of engineers who want to meet Katy Perry and it was a huge success.”

The tour sold out in minutes, Zuckerberg said proudly. After that came more celebrities, and political figures – including President Barack Obama.

“I was at dinner with my husband and I got to say, ‘Hold on honey, the White House is calling,’” she said beaming. “And they were calling because President Obama wanted to use Facebook Live to do a town hall to all of America – and this was three months after I created this hackathon project.”

“Everyone from Bill Gates to the minister of Tunisia – who actually bypassed BBC news and said he only wanted to talk to people through Facebook directly.”

While Zuckerberg shared her successes she also shared her failures – which included a failed reality television show on Bravo that featured entrepreneurs in Silicon Valley. Zuckerberg was among those featured because she wanted to create a media company – Zuckerberg media.

“It bombed,” she said. “It ran one episode and then it was moved to the 4 a.m. slot – where shows go to die. I mean I started my own media company and left Facebook to do this. And my first show was running a marathon against the Super Bowl.”

But the failed show would later become an opportunity. At this point in time Zuckerberg had already written a children’s book – Dot, and a few months after the failed Bravo TV series, Zuckerberg was contacted by the network who wanted to introduce her to the head of children’s programming at NBC for and adaptation of her children’s book.

“And they bought the show and no, there are 52 episodes of DOT,” she said. “So things that look like failures that punch you in the gut – are actually just things you have to do in order to get something that successful.”

By not listening to nay sayers, Zuckerberg was given the chance to perform on a Broadway’s Musical, “Rock of Ages.” Her dream of singing on Broadway came true. Zuckerberg ended her speech encouraging students not to limit themselves to their career.

With so many accomplishments under her belt, Zuckerberg said that she did enter a point in her life where she felt sucked into a world where the only thing that mattered was your work and then family.

“And I felt really lost for some years because I thought, I love my career and I love my family – but I really love music and it’s part of who I am. And I just thought – why do I have to just focus on my career and my family and that it? I want to encourage you guys to have your career, and your side hustle, and your dreams. You can still be a badass in the boardroom and sing on broadway – the two things don’t have to be exclusive.”

On that note – Zuckerberg sang a parody of the Little Mermaids, “” with lyrics that revolved around gadgets, ipads and smartphones.

After Zuckerberg spoke – and sang – the audience was allowed to ask questions which ranged from political to how to raise a child with so much technology today.

While Zuckerberg was not able to speak on behalf of Facebook, she readily gave her opinion and offered advice.

Estrella Estrada, assistant to President Diana Natalicio at UTEP, asked Zuckerberg what her thoughts on giving kids too much screen time?

“I have two daughters and they play minecraft,” Estrada said. “And I just want to know – I enourage them to play outside, but with a mother and someone with professional experience – what is a happy medium of technology in regards to our children?”

Zuckerberg said the balance really came down to the passive use of technology over active use.

“Now, listen I live in the real world and I’m a mom of two boys and sometimes you just gotta hand over the iPad to take a break – that’s just something that is going to happen,” Zuckerberg said. “But in general, the mind set should be to show our kids is an active activity; and not to be used as a baby sitter. So, it’s a matter of how you use it – and choosing to sit along side them and do an activity or a game. That makes a real difference.”

Zucerkberg added that having a balanced relationship with technology in our own lives goes a long way too.

“We do not have a healthy relationship with technology,” Zuckerberg said.  “When I was in Silicon Valley everyone drinks the kool-aid and technology is great. But when I became a mom, I started to realize maybe our relationship with technology wasn’t so great. The other day I literally saw someone fall into a manhole because they were looking at their phone. I recently returned to Silicon Valley and I saw one of those self-driving Google cars and thought, ‘Oh my God, no one is driving that car.’ Then I looked around me and all the other drivers were texting and I thought, ‘Oh my God, none of these cars have drivers either.”

Other individuals asked if a mentor at Facebook influenced Zuckerberg’s success and whether she had any advice to offer to women seeking to be successful in the business world.

Zuckerberg said that while having a gender neutral name proved to be vital in getting her meetings, she also added that young women – and in general young entrepreneurs – should spend less time worrying about seeking the “right” mentor and more time learning from those around them.

“I wasted so much time looking for the one mentor that was going to teach me the ropes and teach me to be a successful businesswoman, and I later realized my best mentors were my peers,” she said. “They were the people who broke ground and were going through the same thing I was. Sure at the age of 20 and 21 my peers are not all running the show – but ten years from now, they will rise together – and I wish that I had spent more time in growing that network.”

Through the Jewish Federation of Greater El Paso, the Inter-American Jewish Studies Program and UTEP, Cappell has hosted other speakers including author Gary Shteyngart and musician Andy Statman.

Cappell said he wants to continue to bring notable speakers to the area.

“We try to do a large number of these cultural programs that have a far reaching value to El Paso,” he said. Cappell added that a bonus of brining speakers like Zuckerberg  to El Paso, is that it opens their eyes to the area, which through word of mouth, gets other artists, authors and accomplished individuals to come to El Paso.