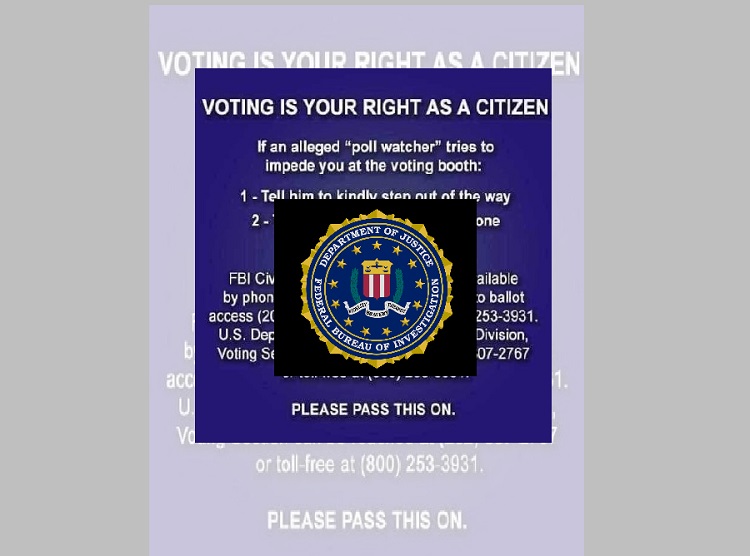 On Wednesday, officials with the Federal Bureau of Investigation (FBI) El Paso office issued an advisory regarding election disinformation attempts being spread through both text and social media in the area.

“Several reports have been received regarding a resurfaced 2016 image that is being circulated through text message and social media that claims that if an alleged “poll watcher” tries to impede you at the voting booth to take a picture of the individual with a cell phone and call the Federal Bureau of Investigation,” FBI officials shared. “The image contains alleged telephone numbers for the FBI Civil Rights Division and the U.S. Department of Justice, Civil Rights Division, Voting Section.”

Bureau officials added, “This image is not an official statement from the FBI and does not display the correct telephone number for the
FBI’s Civil Rights Division.”

Officials say if anyone receives this image via text message, they are asked to report it to their local FBI office or submit it to the FBI’s Internet Crime Complaint Center at ic3.gov with as much information as possible; including the telephone number sending the message.

They add that, if the text message contains a link, do not click on that link. It may contain malware or other cyber concerns.

“We all have a role to play to protect the sanctity of our elections,” said Special Agent in Charge Luis Quesada. “We are providing information and guidance to the public so everyone can make their own informed decisions about what they view, read, and share on social media. It may seem trivial but making sure you only share confirmed information on social media would go a long way towards protecting our democracy. We all have a shared mission to protect the American democratic system from foreign adversaries.”

Examples of federal election crimes include, but are not limited to:

▪ Giving false information when registering to vote
▪ Voting more than once
▪ Changing ballot markings or otherwise tampering with ballots
▪ Compensating voters
▪ Threatening voters with physical or financial harm
▪ Intentionally lying about the time, manner, or place of an election to prevent qualified voters from voting
▪ Political fundraising by federal employees
▪ Campaign contributions above legal limits
▪ Conduit contributions
▪ Contributions from foreign or other prohibited sources
▪ Use of campaign funds for personal or unauthorized purposes

FBI officials say that distinguishing between legal and criminal conduct is critical for ensuring the integrity of U.S. elections.

The following activities are not federal election crimes; however, states have their own election laws,” bureau officials added. “If you are concerned about a possible violation of a state or local election law, contact local law enforcement,”

What the Public Can Do

▪ Ask simple questions: Ask yourself, “Who are you talking to online?” and “Where did the information you are reading come from?” Maintain a general awareness that foreign adversaries seek to deepen divisions in the United States. They may be counting on you to forward information you don’t know to be accurate.

▪ Ask where information originated: Know the origin of information, including the ideology and motivation of the source, and seek out multiple sources to make informed judgements. Be aware of your own assumptions and biases, and how a foreign adversary may choose to manipulate them.

▪ Be aware of social media deception: Social media provides our adversaries with a way to easily and anonymously connect with them, so users should know their contacts and followers before forming a relationship with them virtually.

▪ Check your polling information: Before election day, ensure the information you receive about your ballot, polling location, or other general information are sourced to official government websites.

▪ Beware of “deep fakes”: Emerging technology used to generate “deep fakes”—advanced synthetic audio and video generated through artificial intelligence—may mimic authentic communications in a manner that is hard to detect and to counter. “Deep fakes” may be able to elicit a range of responses, which can compromise election security. The FBI has been working with the private sector to get ahead of this issue.