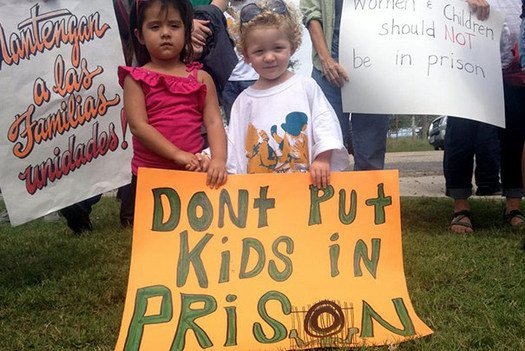 ANTONIO, Texas – Federal immigration centers have begun releasing hundreds of families from detention after a Texas judge ruled the the centers cannot be licensed as child-care facilities.

While the ruling had been long-sought by immigration activists, the flood of families released by Immigration and Customs Enforcement (ICE) has temporarily overwhelmed relief organizations.

Amy Fischer, policy director at the Refugee and Immigrant Center for Education and Legal Services (RAICES), said it normally assists just a few families at a time. She said ICE’s actions prove there’s no real need for family detention.

“The Obama Administration has upheld their use of family detention by saying that there is processing that is necessary, that happens in detention centers,” she said. “And what we saw this weekend proves that that is simply untrue.”

Following the ruling, Fischer said ICE began putting hundreds of people on buses, many to the RAICES intake center in San Antonio, where they’re being prepared to live with family members or sponsors in the U.S. until their immigration status is finalized.

Fischer said ICE sent her organization more than 450 immigrants over the weekend, and she believes that thousands more will be released in the coming weeks.

“We are only assuming that these massive releases will continue,” she added. “Everything that we have learned about the larger situation, other than when a bus is coming and the number of people around it, we have heard from reading it in the media.”

Bob Libal, executive director of Grassroots Leadership, the group that challenged the family detention policy, said the win means families will no longer live in prison-like conditions awaiting their immigration hearings. However, he said the fight isn’t over.

“The state appealed yesterday, so this will continue to wind its way through the courts,” he said. “This is yet another step along the way, in hopefully ending the practice of detaining families altogether.”