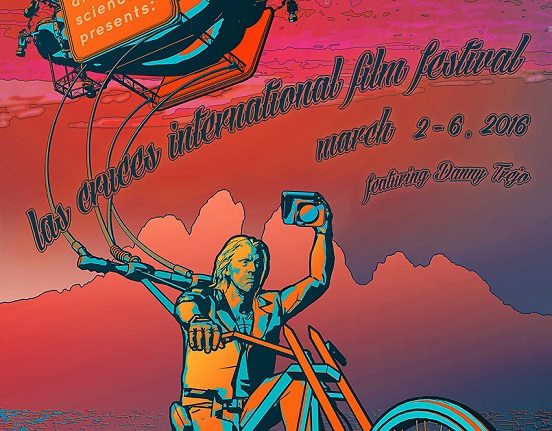 The Las Cruces International Film Festival (LCIFF), presented by New Mexico State University, is set for March 8-12 but film lovers can get preview when festival organizers unveil the 2017 festival poster at a special event from 6-9 p.m. Tuesday, Jan. 24, at the Cutter Gallery at 2640 El Paseo.

Tickets for the unveiling are $25 and include food, beverages and an official poster signed by the artist, Jud Wright, an accomplished illustrator, painter and graphic artist. Wright and his wife, Anna Perez-Wright, have owned and operated Del Valle Design and Imaging as well as Justus Wright Galeria for more than 30 years.

“As a special incentive for the folks attending the poster party, we will be offering VIP passes to the festival for $100, which is $50 off the regular price,” said Ross Marks, assistant professor in NMSU’s Creative Media Institute and executive director of the festival.

The Creative Media Institute in the College of Arts and Sciences began supporting the festival last year to bring the best of international cinema to Las Cruces.

This year’s festival will include appearances by actor Johnny Galecki and writer and producer Don Foster of the “Big Bang Theory.” Other celebrities at the festival include John Heder, actor in “Napoleon Dynamite” and “Blades of Glory,” and Rizwan Manji, actor in “Outsourced” and “Wolf of Wall Street.”

One of the many festival events got underway on Jan. 9, with an 8-week intensive acting workshop coordinated by Priscilla Moralez, who is originally from Las Cruces but spent the last 16 years working in Los Angeles. During the festival on March 11-12, a Hollywood Casting Director’s Seminar will provide area actors, age 6 and up, a chance to hear what it takes to break into the business and what casting directors are looking for in an audition.

More than 2,000 people attended last year’s event and organizers expect more to attend this year. The festival selects outstanding short and feature length films, documentaries, student shorts and narratives of all genres from around the world as part of five days of festivities, workshops, after-parties and film screenings. Festival organizers hope the variety of events will attract film lovers, filmmakers and film students as well as the general public. VIP and filmmaker receptions are also part of the festival.