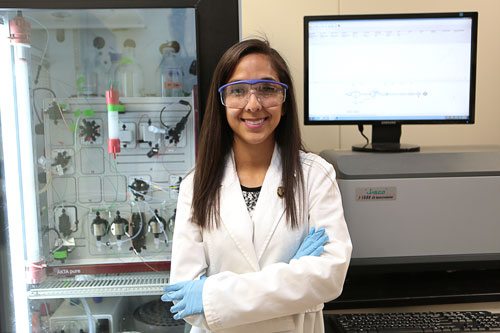 In May 2016, 20-year-old Tiffany Robles became the first in her family to complete college. This fall, she heads to medical school after only three years at UTEP, the first to do so through the University’s A-PRIME TIME program.

The biological sciences major is realizing the reward of all the hard work required by A-PRIME TIME, which stands for the Associated Professional, Relevant, Integrated Medical Education (A-PRIME) partnership of The University of Texas System Transformation in Medical Education (TIME) initiative. Its first cohort included Robles and 19 other students who began the program in fall 2013.

One of the program’s goals is to provide an updated pathway to medical school completion that reflects changes in students, technology and the medical professions over the last 100 years, said Donna Ekal, Ph.D., UTEP associate provost and principal investigator of the A-PRIME grant.

“The A-PRIME students at UTEP and The University of Texas Rio Grande Valley (UTRGV) reflect a growing population in Texas and the U.S. who are not reflected in today’s medical professions,” Ekal said. “They are frequently bilingual/bicultural, from an urban environment, technologically savvy and forward thinking, and deeply committed to their families and local communities.

“Tiffany is an excellent example of the kind of students we see this program attracting – smart, innovative, and with a desire to make her world a better place.”

Kristin Gosselink, Ph.D., the UTEP campus director for A-PRIME TIME and associate dean for the College of Science, said the program was designed to provide a better and faster pathway to and through medical school for students who may not otherwise have the opportunity to pursue this goal, and to foster the development of practicing physicians who are likely to serve the needs of Texas and, particularly, underserved regions of Texas.

“Tiffany is a perfect ambassador for and representative of this program,” Gosselink said. “She has made the most of this opportunity, has met or exceeded every standard and requirement, has supported her peers and younger students in the program, and has always had a very positive attitude.”

Robles has met all the requirements for not simply early acceptance to medical school, but matriculation a full year early as part of the sped-up process A-PRIME TIME offers to help its students transition into the profession, not to mention saving a year of undergraduate tuition.

A-PRIME TIME also gave Robles the opportunity to spend 10 days studying abroad in the Dominican Republic. Other A-PRIME TIME students from UTEP together with their peers at UTRGV traveled to Mexico in January 2016 for a different clinical experience. Both of these opportunities prove that the program is not just about books.

“From differences in health care systems and patient care, to cultural norms and traditions, I feel that this experience has helped solidify the career path I chose to take,” Robles said. “It has given me the chance to understand a different perspective of life and allowed me to take on a more holistic view of health care.”

Robles’ academic success – she graduated with a 3.89 GPA – is remarkable given all she undertook in addition to her studies, much of which she sought out on her own outside of the program’s academic requirements. Her volunteerism within the El Paso community included work at Children’s Hospital, the Hospitals of Providence East emergency room and the YWCA’s childcare department. After volunteering at Children’s Hospital, she realized her passion for children and wanted to gain more experience working with them, which led her to the YWCA.

“That is where I was able to learn a lot about communicating, listening and understanding the needs of the toddlers I soon grew attached to,” Robles said. “I would participate in their storytime, arts and crafts, and the occasional hand-washing lessons. This opportunity helped me to strengthen my interest in working with children in my future profession.”

On campus, Robles served as a Miner Ambassador; was treasurer of the FYI (First Year Incoming) Scholars at UTEP, a program dedicated to helping new students with scholarships find a place of belonging on the campus; was lead volunteer chair for the UTEP Live leadership program committee; and served with the Impact Project mentor-mentee program for career development.

Close to her heart has been her work as a volunteer with the Humane Society of El Paso, where she was promoted to the role of adoption counselor. “It’s a great stress reliever,” Robles said.

Two internships through A-PRIME TIME honed Robles’ acumen. BLAISER, or Border Latino American Indian Summer Exposure to Research, took Robles away from home for the first time to Tucson, Arizona, and gave her a sense of independence as she learned about translational research and took classes pertaining to graduate and medical school.

“That shadowing opened my eyes to a different side of medicine, one with a more intimate setting in which the physician creates a bond with the patient and forms a trusting relationship,” Robles said, explaining that she was at the physicians’ side as they performed routine checkups for high-risk pregnancies and gave frequent counseling sessions for parents when a baby’s prognosis was tentative.

“I feel like this area of medicine is a sensitive one involving a lot of compassion and strength for both the physician and expecting mothers. I was touched as I was able to witness a mother shedding tears for her unborn baby who’s tests came back negative for a disease,” Robles said.

Thanks to these experiences, Robles plans to specialize in pediatrics or maternal fetal medicine, then return to El Paso to provide the best of health care to her hometown community. For now, this hardworking student is headed to McGovern Medical School at The University of Texas Health Science Center at Houston.

In preparation for this next big academic step as well as what’s to come once Robles and her peers are professionals, Gosselink noted that the students are carefully mentored and guided from their entrée into A-PRIME TIME, particularly at first to help them decide whether this path is for them or not.

“[The program] is a huge success in this regard because it means that students get to figure out who they are and what they want to do,” Gosselink said. “They’re supported all the way, whether they go to med school or not. [We’re] creating a new paradigm and teaching them how to deal with ‘no’ or failure.”

The program is also unique in its partnership between UTEP, UTRGV, McGovern Medical School and The University of Texas Medical Branch at Galveston.

“[It’s] an incredible example of how a diverse group of faculty and staff from across the state can work over a seven-year timeframe to reach a common goal of expanding access to and improving excellence of the premedical/medical education continuum,” Ekal said.

The paradigm Gosselink described contributed to Robles feeling empowered enough to overcome some challenges that may have derailed her, one of which was the MCAT, the medical school admissions exam.

On this accelerated path, a minimum MCAT score is required and the deadline for achieving this score is earlier than when most pre-med students even take the test. On her first try, Robles did not meet the minimum score.

Gosselink recalled that rather than give up or try more of the same, Robles adjusted her studying methods and habits to succeed, taking a formal MCAT course, studying with peers, maintaining a disciplined schedule for preparation, and practicing MCAT-style questions while also identifying and using additional resources. She achieved the required score on her second try.

This persistence and eventual success is no surprise to Charlotte Vines, Ph.D., assistant professor of biological sciences, who recalled watching Robles study for a biochemistry exam with her peers.

“As I looked on, I was impressed by her efforts to help her classmates master the material, by helping them to successfully navigate the information, while she was preparing for interviews for medical schools and spending all day and night studying for a very tough exam,” Vines said. “It was not a surprise that she did well on the exam. Time and again, Tiffany has demonstrated that when faced with an adverse situation, she faces the challenge head on.”

Gosselink pointed out that it isn’t only Robles who has learned a great deal the past three years. A number of changes have been made to the program based on the experiences of and feedback from Robles and others in her cohort who had to deal with many unknowns and adjustments as part of the first-ever class. Now, enhanced clinical training opportunities, simulations and more MCAT preparation with a variety of available resources are part of the program.

On a personal level, Gosselink referred to the many times UTEP President Diana Natalicio has talked about the tremendous untapped talent in the region and how Robles is proof of that.

“I’ve learned from [Robles] that students will rise to the challenges you give them, and that they are capable of performing at surprising levels,” Gosselink said. “When medical school faculty interacted with Tiffany and her cohort in their pre-matriculation program – as rising freshmen – we heard multiple comments about how mature the students were and how they asked great questions. One year later, some of the medical school faculty said that the students were performing overall on a level that was equivalent to first-year medical students. I am so proud of Tiffany and all of the A-PRIME TIME students, and I can’t wait to see how they change the future of medicine in Texas.”

There’s no question this outstanding student has taken more than one giant leap throughout her undergraduate career, and will take on many more to come. No one knows this more than Robles herself.

“I am most proud of the transformation I have made throughout my time at UTEP,” she said. “When I started college, I was the complete opposite of the way I am now. I like to read, I enjoy meeting new people, I enjoy getting out of my comfort zone and taking on responsibilities. I feel that attending this school has given me the opportunity to discover my personality and improve my social and networking skills. I have grown so much in just a couple of years and I know that it was possible due to the wonderful faculty, staff, mentors, and students I’ve created relationships with at UTEP.”