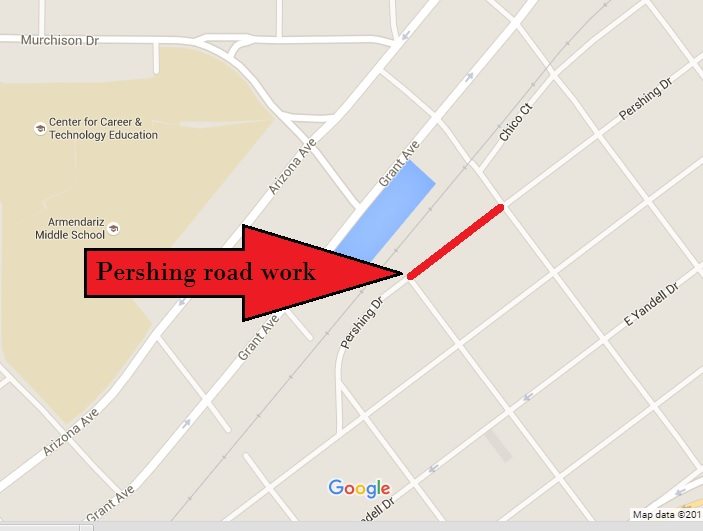 As part of the Five Points Quiet Zone project, the City of El Paso will close Pershing Drive between Magnolia Street and Rosewood Street beginning Monday, September 14th, 2015, in order to replace an aging waterline.

This closure is part of a series of closures on Pershing Drive between Magnolia Street and N. Raynor Street, which will allow for the replacement of the waterline.  The closures will occur in phases in order to reduce the amount of vehicular traffic and inconvenience to residents in the area.

Access to homes and businesses will be maintained throughout the closures, and automobile traffic is encouraged to use Montana Avenue in order to avoid the construction area.

When completed in early 2016, the railroad crossings at Birch Street, Elm Street, Maple Street, and Cedar Street will be permanently closed, while the crossings at Piedras Street and Rosewood Street will be re-opened with new upgrades to their medians, landscaping and sidewalks.

The modifications to the railroad crossings will allow trains to sound their horns less frequently while passing through the area, and will provide more reliable water services to residents and businesses.

Federal Law requires the train conductors to continue using their whistles as a precaution for all vehicles and pedestrians who are on, or near the railroad crossings until the project is complete, and the Quiet Zone has been officially established by the Federal Railroad Administration.