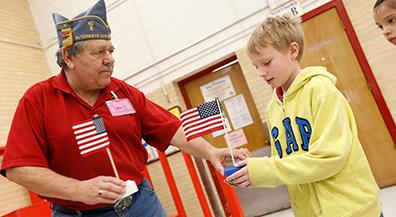 A line of first graders marched out of the Bliss Elementary cafeteria on Wednesday each proudly carrying their own personal American flag mounted on a red, white or blue pedestal.

The students received the flags after a flag etiquette and history presentation by The Forty and Eight, an organization of veterans of the U.S. Armed Forces.

“I’m proud because my mom and stepdad are in the military,” said Nathan Gonzalez, the first student to receive his flag. He’s planning to keep it in his room.

“It’s awesome because I’m learning more about the flag and the United States,” Gabrielle, whose parents are both in the military. “I’m going to put it in the window sill.”

Veteran Renny Keagle, who fought both in Vietnam and Desert Storm, said their organization reaches out to campuses with a high concentration of military family members for their presentations.

The group presented flags to students at Nixon and is planning a trip to Milam Elementary later in the spring.

“We want to teach elementary schools students about flag etiquette, what the flag means, what it represents, how to take care of it and we want to give them their first very own American flag,” he said.

“We want them to know where it comes from and that it’s not just cloth that’s red, white and blue. We feel like if they know the history and why they are doing the Pledge of Allegiance, it will have more mean to them,” Keagle added.

The students learned the proper flag fold, the symbolism of each of the 12 folds and why it’s folded into a tri-cornered hat.

They learned to never hold a flag upside down, drop it on the ground or throw it away and that it must be properly retired when it becomes tattered.

“When you have school on military campus, you want to your students to be well versed in what the flag stands for,” said Sheila Joplin, Bliss’ military family liaison. “Ninety percent of our students here have parents who are active duty. We want them to be able to say ‘I know the history of my flag. I know why my mom or dad do what they do.’”