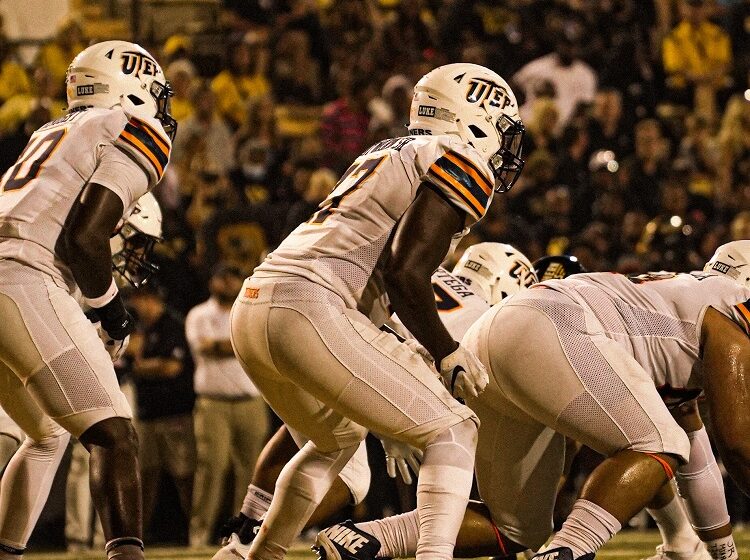 HATTIESBURG, MS. – UTEP is one victory away from becoming bowl eligible for the first time in seven years, after the Miner defense ruled the day once again in a 26-13 triumph at Southern Miss on Saturday night.

UTEP can secure a coveted sixth victory next Saturday (Oct. 16) when it hosts LA Tech at 7 p.m. in the Sun Bowl.

But the defense stole the show with five sacks and 14 tackles for losses and chipped in with two scores — a fumble recovery for a TD by Breon Hayward and a safety.

We’re playing great, that’s what we needed, to be disruptive,” coach Dimel said of the defense.  “Scoring points, that was gigantic for us.  We need to continue to have that happen because that can turn a game around so quickly, getting turnovers and getting points off the defense.”

The teams played to a 7-7 deadlock through the first quarter.  Awatt accounted for the Miners’ points with a 17-yard rushing score.

UTEP went ahead 14-7 on a 53-yard rushing TD by Jacob Cowing in the second quarter – Cowing’s first career rushing attempt.

Early in the third quarter, the Miners scored their first defensive TD of the season and their second under fourth-year head coach Dimel.  Southern Miss quarterback Jake Lange was sacked and lost the football, the Miners’ Heyward recovered and ran 55 yards for a TD – extending UTEP’s lead to 21-7.

On the next series, the Miner defense mounted a spectacular goal line stand, keeping the Golden Eagles out of the end zone when they faced first and goal at the three-yard line and failed to punch it in on four attempts.

The Miners took the 21-7 lead to the fourth quarter, when the defense came up huge once again.  With 8:39 remaining, Lange was sacked in the end zone by the Miners’ Josh Ortega for a safety and a 23-7 advantage.

The Golden Eagles were already finished because they couldn’t move the football against UTEP’s dominant stop troops, but Gavin Baechle gave the Miners a little more breathing room on a 38-yard field goal with 4:55 to go.

The Miners will host LA Tech next Saturday.  Miner legends Tanja Magoc, Lee Mays, Holly Russ, Jami Tullius and the late Jeep Jackson will be honored on “Hall of Fame Night.”  The 2000 Western Athletic Conference champion football team will also be inducted into the UTEP Athletics Hall of Fame that weekend.  Fans can win up to $1,000 every time the Miners score through the Speaking Rock Cash Giveaway.  Tickets are available by calling (915) 747-UTEP or by visiting www.utepminers.com/tickets.