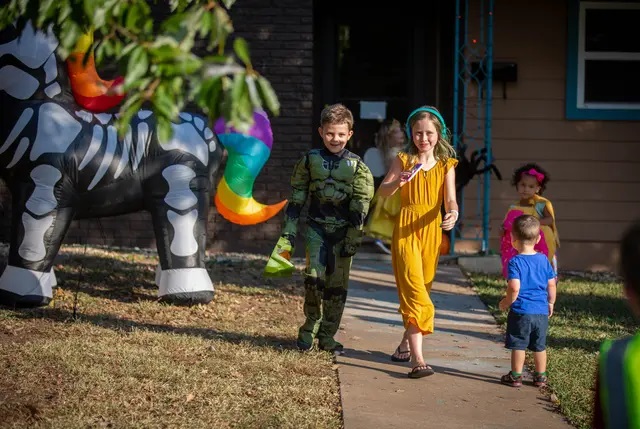 Families across Texas are preparing for Halloween festivities during the COVID-19 pandemic. Some families are forming “pods” with other neighboring families to mitigate social isolation as a result of the pandemic. Credit: Amna Ijaz/The Texas Tribune

Ada Davis, a 4-year-old from Austin, is either dressing up as Belle or Batman for Halloween. Or maybe a combination of both, said her mother, Jenn Deering Davis.

But Ada’s Halloween celebrations will look different this year, as public health experts warn against trick-or-treating, indoor costume parties and other holiday traditions they say are high-risk for spreading the coronavirus.

Instead of knocking on doors for candy, the Davis’ and a handful of neighbors with whom they’ve formed a “pod” will gather on their front yards, sing karaoke and stream the Austin Symphony’s Halloween Children’s Concert, Jenn Deering Davis said.

“The kids can all run around and play and wear costumes, and we’ll have Halloween games and try to make it feel as Halloween-y as we can, but we’re not going to leave the neighborhood or the street,” Jenn Deering Davis said.

As daily case counts and hospitalizations across Texas tick upward, local health officials are cracking down on Halloween. At least two counties – Hidalgo and El Paso – have banned door-to-door trick-or-treating. Others are discouraging participation while promoting safer alternatives such as carving pumpkins or having a candy hunt at home.

“When trick-or-treaters walk from house to house to house, who knows who or what they’re going to come [in contact] with,” Hidalgo County Judge Richard Cortez said in an interview. “It doesn’t mean that the kids can’t have a good time and can’t celebrate Halloween with family, but we just want them to do it safely, and we don’t think door-to-door trick-or-treating is safe.”

City and county officials in El Paso, where coronavirus hospitalizations are soaring, have also banned trick-or-treating. Meanwhile, officials in the state’s largest counties — Dallas, Tarrant, Travis, Bexar and Harris — have stopped short of banning the tradition but recommend against it, pointing to guidance from the Centers for Disease Control and Prevention that says to avoid going door to door and passing out treats by hand.

If families still choose to go trick-or-treating, Austin health officials are asking that they only go with household members, keep 6 feet from others and use hand sanitizer between houses. Tarrant County officials recommend contactless methods for distributing treats, such as hanging them from a wall or fence, and wiping down candy at the end of the night.

“This year, we are encouraging families to make new traditions,” said Austin Public Health director Stephanie Hayden. “We know it’s tough to change holiday traditions, but it is important to keep our loved ones safe this year. Making new traditions can keep families close while keeping everyone safe so that we will be able to gather again in the years to come.”

Cash Hale, an 8-year-old from San Antonio, has spent weeks planning an at-home event where his family will negotiate for different piles of candy, said his father, Travis Hale. At the end of the night, there will be an auction to see who can afford the biggest haul.

“It’s something we talk about almost every night – he wants to make sure we’re ready for the new Halloween,” Travis Hale said. “We would love to [go trick-or-treating], but it doesn’t make sense to go through the neighborhood and go to everyone’s doors.”

Cortez, worried about grabbing treats out of communal bowls and passing out candy by hand, is hoping his ban on trick-or-treating will prevent another surge similar to the one Hidalgo County officials saw in July.

This summer, the Rio Grande Valley, where Hidalgo County is located, was considered one of the worst hot spots for coronavirus cases in the country. But Cortez said not everyone agrees with his decision, and he’s concerned about enforcement across the county’s 22 cities.

“There’s some [parents] that are screaming and yelling about how can we keep their children from enjoying Halloween traditions, and there’s some that say thank you for keeping us safe,” Cortez said. As of Oct. 20, the state reported 34,179 cases in Hidalgo County.

Matt Howard, of San Antonio, said he and his wife have struggled to reimagine Halloween for their 3-year-old son, Jude Howard, who loves the holiday and “would celebrate year round if he could.” The three are dressing up as characters from the children’s superhero show “PJ Masks.”

“We’ve had some really tough conversations [with him] about how this year is not going to be like last year, and we’re not going to walk around the neighborhood and go door to door,” Matt Howard said. “He’s excited about the idea of candy and putting on a costume, but he’s a little bit sad about not getting to see his friends or other people walking around our neighborhood in costumes.”

This year, Matt Howard said his son will go trick-or-treating inside their house, with a different family member waiting – virtually – behind each door.

“When he comes to the door, he’ll knock on it, say ‘trick or treat’ and get to go through the whole ritual,” Matt Howard said. “On the other side will be his grandfather on a screen, waiting to talk to him. It’s not quite the same, but it’s hopefully good enough to give him a little bit of a Halloween experience.”