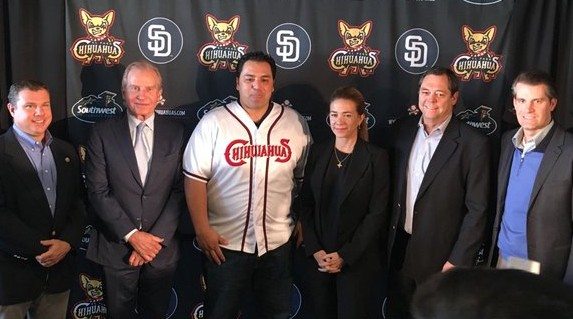 Rod Barajas will be the El Paso Chihuahuas field manager in 2016, the Chihuahuas and San Diego Padres announced today. Barajas began the 2015 season as High-A Lake Elsinore’s hitting coach and was elevated to be Double-A San Antonio’s manager at mid-season when Jamie Quirk was promoted from San Antonio to El Paso.

The 40-year-old had a lengthy playing career, spending 14 seasons in the major leagues with the Arizona Diamondbacks, Texas Rangers, Philadelphia Phillies, Toronto Blue Jays, New York Mets, Los Angeles Dodgers and Pittsburgh Pirates. He was a member of the 2001 World Series champion Diamondbacks and hit a home run in Game 5 of that year’s fall classic at Yankee Stadium.

“I am extremely excited. I’ve heard from Pat Murphy, the former Chihuahuas manager, that this is the most electric and vibrant stadium in Minor League Baseball,” Barajas said. “It’s going to be a really fun experience for me and my team. We’re looking forward to making something special happen in El Paso this year.”

“Rod brings terrific credentials to the Chihuahuas, and his background makes him a great fit for El Paso and the Borderplex,” said Alan Ledford, President of MountainStar Sports Group. “We look forward to welcoming him to Southwest University Park.”

Morgan Burkhart will be the Chihuahuas hitting coach in 2016 after working for Double-A San Antonio in the same capacity last season. Burkhart also has major league experience, playing for the Boston Red Sox from 2000-2001 and the Kansas City Royals in 2003. He has been a coach in the Padres organization since 2013.

Bronswell Patrick will continue in his role as the Chihuahuas pitching coach, his third season as the Padres Triple-A pitching coach and ninth year in the Padres organization overall. Patrick was originally acquired by the Oakland Athletics in the 23rd round of the 1988 draft and spent parts of two seasons in the major leagues with the Milwaukee Brewers in 1998 and the San Francisco Giants in 1999.

Athletic trainers Nate Stewart and Isak Yoon will return to El Paso in 2016 for their fourth seasons with the Padres  Triple-A affiliate.

“We are excited to have Rod and his major league pedigree come back to El Paso as a manager after he played for the Diablos in 1999,” said

Chihuahuas General Manager Brad Taylor. “We also welcome another staff member with major league experience, Morgan Burkhart, as our new hitting coach. And of course we are excited about the return of pitching coach Bronswell Patrick and athletic trainers Nate Stewart and Isak Yoon, all of whom were part of last year’s division-winning team.”

In conjunction with Barajas’ hiring, the Chihuahuas are also announcing the Chihuahuas/Padres First Pitch Luncheon to take place on March 31, 2016 prior to that night’s exhibition game. The luncheon will feature Padres and Chihuahuas players and coaches, with net proceeds benefiting the YMCA of El Paso and the El Paso Chihuahuas Foundation.

The format includes question and answer sessions with guests to be announced. There are a limited number of tables that guarantee a player or coach will sit at your table for $1,250. Tables of nine (9) are $1,000 and individual seats begin at $125.

The Chihuahuas open the 2016 season on April 7 in Reno and return to El Paso for the home opener on April 15 vs. the Aces.