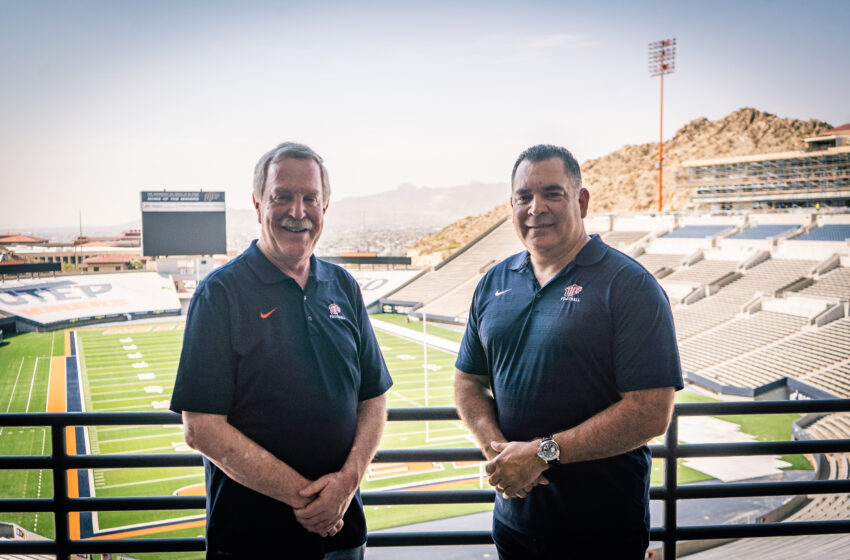 Mike Perez will team up with “The Voice of the Miners” Jon Teicher to call all the action of 2020 UTEP Football on the Miners’ flagship radio station, 600 ESPN El Paso.

Perez takes over as color analyst for Bernie Ricono, who has retired from the position after 28 seasons.

Perez, a San Antonio native and UTEP Kinesiology graduate, quarterbacked the Miners from 1990-93, throwing for more than 4,100 yards and 20 touchdowns. He started eight games as a redshirt freshman, threw for a career-high 290 yards in a 1991 win at Hawaii and still ranks eighth on the UTEP all-time list for both passing yards and touchdowns.

His younger brother Rocky was also a UTEP quarterback and directed the Miners to the school’s only Western Athletic Conference Football Championship in 2000.

“I am absolutely honored to be joining Jon Teicher and the UTEP Football broadcast team,” Perez said.  “I have tremendous respect and admiration for Jon and what he means to UTEP Athletics.  I look forward to learning from a true legend and watching his preparation leading up to each game.  I hope to add something positive to the broadcasts and will work diligently to give Miner fans an informative experience.”

“I am delighted to welcome Mike to the UTEP Football radio broadcast crew,” Teicher said.  “Mike gave everything he had during his UTEP playing days, and I have no doubt that he will as well in breaking down the action for Miner fans.”

UTEP will open the season against a to-be-announced opponent on Saturday, Sept. 5 at 7 p.m. in the Sun Bowl.  Coverage of Miner Football on 600 ESPN El Paso begins with the “Countdown to Kickoff Show” one hour prior to the start of the game.

Fans can also catch all of the action via KROD’s website.