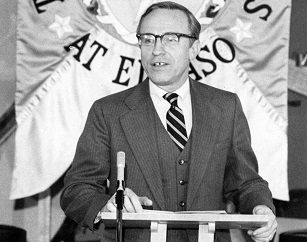 Dr. Monroe served as UTEP’s president from 1980 to 1987. His great love of books and his commitment to providing students with access to a world-class selection of volumes, journals and publications resulted in his greatest legacy: the $28 million University Library, which opened in 1984. He also led the establishment of the Junior Scholars Program, which offered middle and high school students the chance to take UTEP courses for credit, the Presidential Scholarship program to attract the region’s top high school graduates, and such enduring UTEP traditions as graduation banners and the celebration of fall and spring convocations.

“Haskell Monroe was both an administrator and a deeply committed historian and educator who loved teaching,” said UTEP President Diana Natalicio. “He taught large freshman history classes throughout his tenure as UTEP’s president, and was always fascinated by the history of this region and the mining school (now UTEP) that helped shape it. His major achievements as UTEP’s president, including our beautiful library building, continue to support UTEP’s more recent development.”

Monroe left UTEP to become chancellor of the University of Missouri at Columbia, but his interest in UTEP, and especially the Library, never waned. In 2013, he and his wife, Margaret Joann “Jo” Monroe, established a Library Special Collections Endowment. Three years later, the couple made another major contribution to the Special Collections department, whose research space was officially re-named the Jo and Haskell Monroe, Jr. Special Collections Research Center.

At the time of the dedication, Jo Monroe spoke of her husband’s enduring pride in the University he led three decades ago.

“This was a wonderful opportunity for us in recognition of how much Haskell loved UTEP and how proud he was of the University and the library,” she said. “With this gift, we hope to enrich Special Collections, enhance research and encourage students to take advantage of the space and resources of the library.”