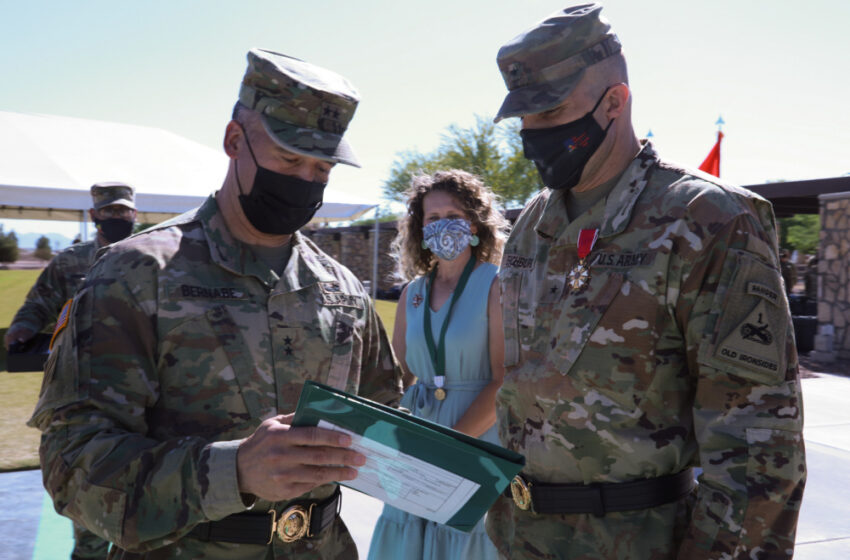 The retreat ceremony is a tradition as old as the U.S. Army itself, signaling an end to the work day and, in this case, an end of time in position. Eichburg, a native of Warren, Michigan, has served in 1AD since 2019.

Eichburg’s time at Fort Bliss was not typical of that of his predecessors. He assumed command of the 1st Armored Division twice, once for nearly a year while Maj. Gen. Patrick Matlock was deployed to Afghanistan, and again after Matlock departed Fort Bliss last July and prior to Bernabe’s arrival in September 2020.

Of his time with 1AD and Fort Bliss, Eichburg said, “My favorite memory would be the honor of being the Fort Bliss and 1AD commander, if even for a short time. It gave me the opportunity to better appreciate what everyone does on Fort Bliss and how important it is to the Army.”

“At one point while Maj. Gen. Matlock was deployed, Matt wore five different hats. That’s a lot to ask of anyone, but he and his family took on the added responsibility with grace. He’s helped me and my wife Jayne so much since we arrived, and I am truly grateful to have worked with him,” Bernabe said.

Eichburg’s wife Jolene was also recognized for her contributions to Fort Bliss and El Paso, receiving the Public Service Commendation Medal as well as being commissioned as a Yellow Rose of Texas by Texas Governor Greg Abbott.

“I cannot express in words how thankful myself, Jolene, Kate, and John are for having been allowed to live and serve on Fort Bliss and in El Paso. El Paso is a beautiful city and not just because of the landscape,” Eichburg said. “The people here are just wonderful and made us feel at home the moment we arrived. We’ll tell anyone who will listen that they need to serve out here.”

The retreat ceremony served as a bittersweet reminder that the division and the installation is losing a tremendous leader, but 1AD’s loss is U.S. Army Central Command’s (USARCENT) gain. Eichburg departs Fort Bliss to serve as the Chief of Staff for USARCENT, responsible for providing continuous oversight and control of U.S. Army operations throughout the Middle East, Central and South Asia.

“I most look forward to establishing new friendships and relationships and to helping USARCENT accomplish its mission. I try to constantly seek self-improvement and I am sure that I will learn a lot in this new position,” Eichburg said of his impending move.