Sgt. 1st Class Chasity Welch, a native of Cincinnati, Ohio, assigned to Headquarters Company, 40th Brigade Engineer Battalion, ground guides a Nuclear/Biological/Chemical Reconnaissance Vehicle (NBC-RV) into position Nov. 13 at a training site on Fort Bliss, Texas. Welch and her Soldiers were in support of the Warfighter 19-2 exercise from November 4-15. The purpose of the exercise was to train the 1st Armored Division in a demanding exercise testing America’s Tank Division and its Soldiers on all warfighting functions while simultaneously conducting operations in a simulated, complex combat environment. | Photo by Spc. Karen Lawshae – 1st Armored Division

The 1st Armored Division participated in the Warfighter 19-2 exercise, across several training sites here in the sprawling military installation in preparation for future contingency operations.

Warfighter was the culminating event of a series of training exercises held by America’s Tank Division over the past six months. The exercise assessed 1AD’s ability to manage, direct and synchronize across multiple brigades aimed to train and improve operational readiness, warfighting functions, and effectiveness across the Division staff, and units assigned.

“Every Soldier, every process was tested, and we learned a great deal. All of these things are extremely important to the success of our Division and it’s especially great to train with our joint teammates in this environment,” said Maj. Gen. Patrick Matlock, commanding general of the 1st Armored Division and Fort Bliss.

“When you come to Warfighter you got to take advantage of every minute. We are extremely proud of the men and women of this Division for their excellence and professionalism. The MCTP [Mission Command Training Program] provided us a tough scenario and challenged every section throughout the exercise.”

The Mission Command Training Program team from Fort Leavenworth, Kansas, sent several observer-coach/trainers (OC/T’s) to Fort Bliss to oversee the exercise and give expert feedback and guidance to each staff section. Each OC/T is a subject matter expert in their respective field and provides professional insight for the sections’ development.

The 1st Armored Division was evaluated on multiple collective training tasks ranging from maneuvers to communications, staff processes, and establishing and re-establishing its command post between multiple training sites.

“I spent 20 of my 44 years on active duty with this great Division,” said Ret. U.S. Army Lt. Gen. Michael S. Tucker, who served as the senior mentor during the Warfighter 19-2 exercise. “You have warmed my heart, and I could not be more proud of “Old IronSides.”

The most daunting task during Warfighter was the movement of the division’s main command post, which involves transporting large pieces of equipment, and sensitive items such as computers and communications equipment. In additional the movement of dozens of military vehicles and hundreds of personnel can come with many logistical challenges.

“This task is extremely complex because we have operations elements [teams of Soldiers] conducting recon, surveying engineering aspects to secure a location, and the ability to get to terrain.” said Lt. Col. A. Geoff Miller, commander of the Headquarters Battalion, 1st Armored Division.

Miller, a native of Roswell, N.M., added that his Soldiers were vital to ensuring that critical equipment was moved in a timely manner to conduct military operations effectively.

The exercise also served as a learning experience for the unit’s youngest Soldiers.

“The best thing I learned was to keep your composure and trust in your team,” said Pfc. JerMichael Bunch, from Kingston, Penn., who serves as a fire control specialist with the division’s fires section. “You’re always moving, and fire missions accumulate. I didn’t realize how important I was until Warfighter. I like what I do, and I love my section. They prepared me to see the bigger picture.”

The Warfighter exercise was not exclusive to the 1st Armored Division and included several units across the U.S. Army. The 3rd Infantry Division from Fort Stewart, Georgia, the 82nd Airborne Division from Fort Bragg, North Carolina, and the III Corps staff from Fort Hood, Texas also participated in this large-scale exercise.

For the Iron Soldiers, this exercise is a key milestone in the division’s ongoing journey of training and operational readiness.

“I’ve seen vast improvements along the way,” said Command Sgt. Maj. Gary Yurgans, senior enlisted advisor of Headquarters Battalion, 1st Armored Division. “We are proud of our preparations and efforts put in by our Soldiers, to work as a team and come together.” 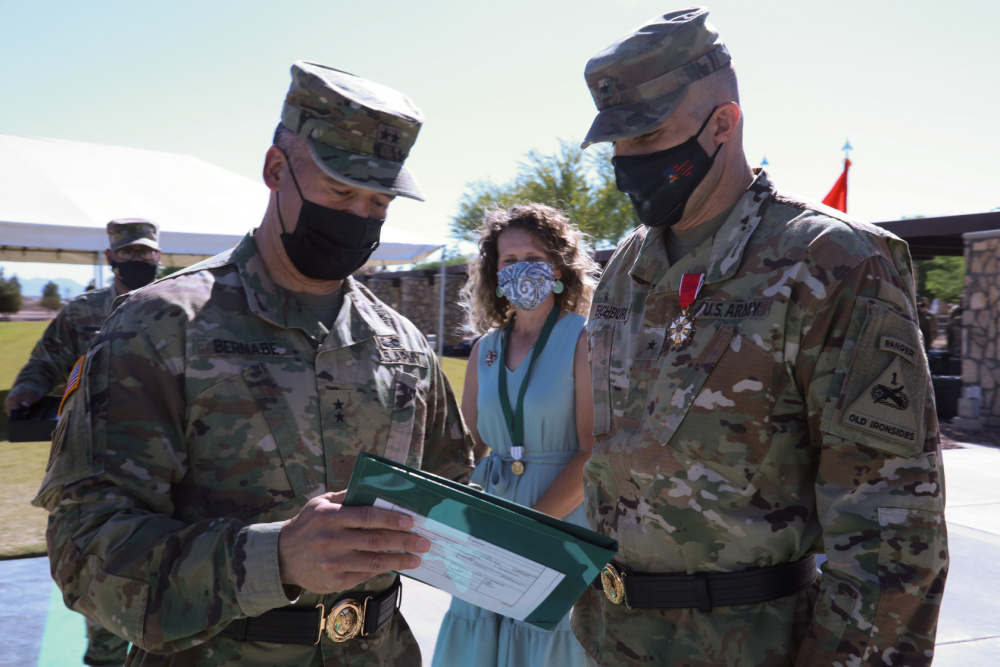