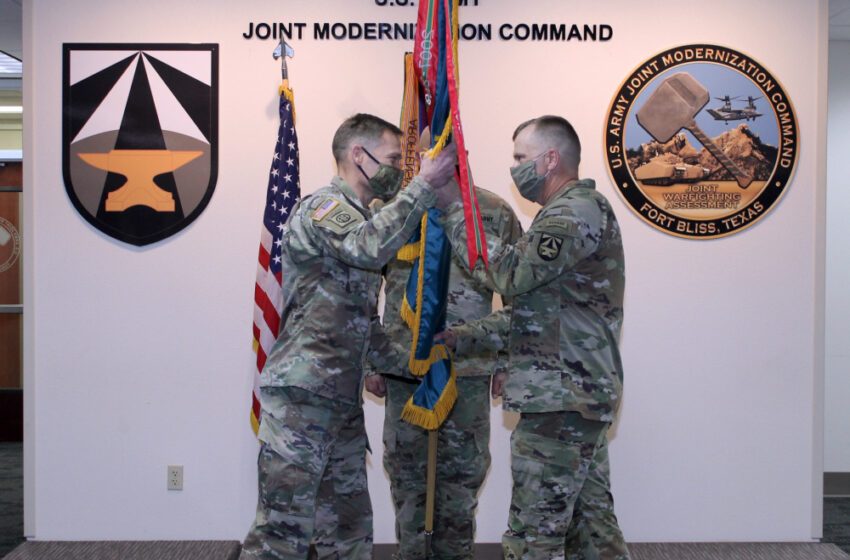 During a Relinquishment of Responsibility Ceremony this week, Command Sgt. Maj. Christopher Gunn said goodbye to the U.S. Army Joint Modernization Command as he moves to his next position as command sergeant major of the U.S. Army Infantry School.

In an interview before the ceremony at Fort Bliss, Gunn reflected on modernization lessons learned, as well as leadership lessons stemming from the COVID-19 pandemic.

“Gen. Wesley (Lt. Gen. Eric Wesley, previous deputy commanding general of U.S. Army Futures Command) said at the very beginning of my time here, ‘JMC is the greatest organization that no one knows anything about,'” Gunn said. “We are the organization that does live experimentation in the dirt with Soldiers, and we provide them a venue that they can fail in. At the National Training Center, they are on a report card, and it’s incumbent on them to pass there. With us, when they fail, we learn as much if not more than if they had succeeded.”

During his time at JMC, Gunn always reminded leaders that the work they were doing was about protecting future American Soldiers.

“I’ve heard Gen. Mike Murray (commander, Army Futures Command) say that, if we get this right, we’ll have generations of Soldiers who don’t have to go to combat because we’ve deterred our enemies to such an extent that they do not want to fight us,” Gunn said.

“One of the biggest things I’ve learned is that when you look at the Army modernization effort, you need to look at it through a lens of DOTMLPF-P (Doctrine, Organization, Training, Materiel, Leadership, Personnel, Facilities and Policy), because all those things are going to have a big part on what the Army is going to do,” Gunn said. “It’s one thing to say that you want to modernize the Next Generation Combat Vehicle. But if you don’t have the facilities to work on that vehicle, if you don’t have the ranges with the right distances to shoot the weapons systems that are on there, then where are you going to train with it?”

During the last nine months of Gunn’s time at JMC, he’s had to continue to lead Soldiers despite the COVID-19 pandemic making face-to-face meetings difficult. Gunn led virtual workout challenges and used technology to work through those issues.

“It’s hard to stay connected to your people in a COVID environment,” Gunn said. “But it’s no less important to take care of people. The chief of staff of the Army has made people his #1 priority, and as a leader, people have always been my #1 priority. The ability to look someone in the eye daily, you cannot overemphasize that. If you can see them every day, you know their demeanor and you’re going to notice a difference when there is something wrong. Not being able to do this, you have to find new ways to connect. MS Teams has been great for that.”

Now, Gunn heads to the Infantry School at Fort Benning, Georgia, back to the Infantry branch that he has held dear. He is looking forward to the challenge, while fondly remembering his time on Fort Bliss.

“JMC is a unique organization because, yes, we are an Army command, but I think we are so much more than that,” Gunn said. “Until you are a part of this unit, you don’t know that. You don’t know how much of a family we are.”

The JMC family wishes Gunn, his wife and his children well as they move on to their next Army mission.