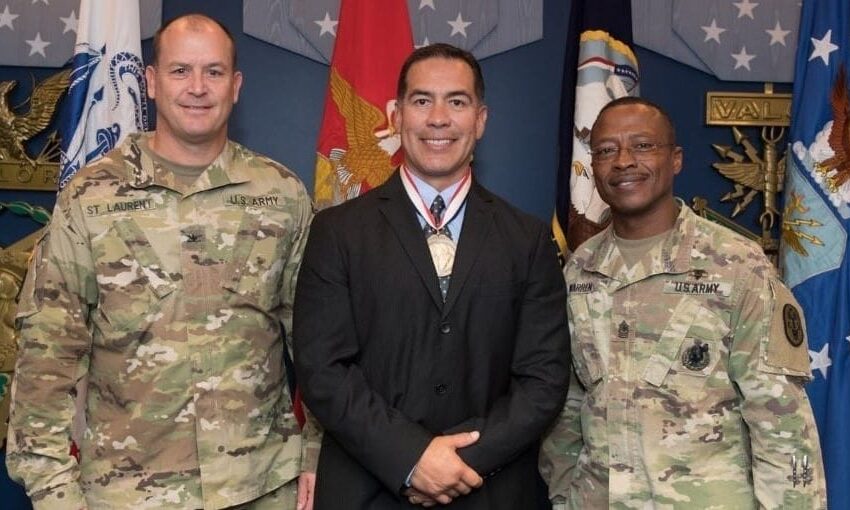 To say Luis Cortez is dedicated to his job is an understatement. As a physical therapist with the Warrior Transition Battalion at Fort Bliss, Luis Cortez, has an open door policy and answers his cell phone 24 hours a day for his beloved Soldiers. His commitment ion to his job and Soldiers was recognized recently when he received the Spirit of Hope Award.

The Spirit of Hope Award was established in 1997, and is named after actor and comedian Bob Hope who entertained U.S. troops for decades and was named an honorary veteran. The award recognizes Americans who share Hope’s enthusiastic patriotism, compassion and admiration for the men and women who support and defend the Constitution of the United States.

Past recipients of the Spirit of Hope Award include singer Toby Keith and actor Gary Sinise.

Cortez, one of six individuals awarded this year, received the award for his support, positive attitude and flexibility to often go above and beyond his call of duty to assist wounded ill and injured Soldiers.

“When I received the award I was a bit emotional because I remembered all the Soldiers that are and have been under my care and the fight they have had to improve their physical situation,” Cortez said. “I am incredibly honored, it was so unexpected and to be given an award by my peers makes it even more special. I give my all to the people I serve.”

For the past three years, Cortez has tailored his physical therapy program based on the individual Soldier’s specific needs while incorporating innovative techniques depending on their limitations within the adaptive reconditioning program. From implementing therapy programs to managing equipment, Cortez says helping the Army’s wounded, ill and injured is like helping a family member.

“My job is to push and encourage the Soldiers. However, I’m right there with them doing the same activity whether it’s giving them physical therapy, cycling or strength and conditioning. I want them to perform to the best of their ability,” Cortez said.

Cortez is doing what he loves and trying to be a positive source for the Soldiers he works with.

“Soldiers are the most appreciative people and I try to instill in them that they should never give up. If you keep fighting you are giving yourself a choice to either maintain or improve but if you stop and give up then you eliminate those options.”