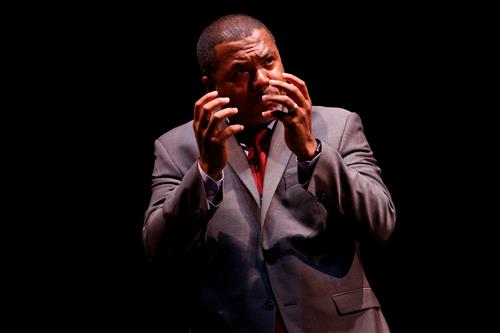 Original Freedom Writer Manny Scott inspired administrators last Thursday at Bowie High School by painting a picture of how he emerged from a teenager living on the streets involved in gangs and drugs to his life now as a motivational speaker and doctoral student.

Scott wrapped up the last day of the Champion By Design Conference by sharing his message of hope. He began his presentation singing Mahalia Jackson’s “If I can Help Somebody,” a gospel song to illustrate his life mission now and encouraged others to follow suit.

He used the song to tell how his story changed because of dedicated and caring educators who encouraged him and didn’t give up on him – despite knowing his disturbing past and the challenges he continued to face.

“I am convinced you got into education and you are still here despite its challenges because you believe that life at its best isn’t about how much money you have or how many degrees you’ve earned or how many things you’ve accumulated in life,” he told principals and other administrators. “Life at its best is about helping people, loving people, serving people and positioning other people to flourish.”

Violence and despair plagued his childhood: sexually abused, father in prison, skipped nearly half the school year from 4th to 9th grade, dropped out by 14, homeless and hungry, lived in 26 places by 16, and lost friends to gunshots. It took a caring stranger to break the cycle, offering advice to turn his life around and return to school.

He landed in English teacher Erin Gruwell’s class, her work made famous by the 2007 motion picture movie “Freedom Writers.” One of the original students of Gruwell’s first class, Scott recalls Gruwell reaching him and other students by using the rap music of Tupak Shakur and Snoop Dog as teaching tools for Shakespeare, metaphors and iambic pentameter. Math and science teachers also tutored him, ensuring he’d understand and continue. The Fs and Ds he earned before dropping out were soon replaced by As and Bs once surrounded by caring educators.

“I had the help of people just like you,” he said. “People committed to making a difference.”

Even the lunch lady made an impression. Her words gave him inspiration at a time he felt like giving up.

“You are going to be great one day,” she told him. “I can see it in your eyes. Now go to class and keep trying.”

Gruwell asked the students to start writing about their lives – the violence, the unimaginable struggles they faced growing up. She told them not to worry about grammar and punctuation. To her, what mattered most was getting their words onto paper, allowing them free expression.

“Humble yourself and become a student of your students,” he said. “Study their cultural patterns. Try to understand what they have to go through to get to your classroom. What you say can either create distance or alignment.”

He uses the example of the elementary teacher who called him out for wearing dirty clothes and failing to do his homework.

“Why do your clothes look like you don’t have a washing machine?” a teacher asked him. “Your clothes stink and the kids are complaining. If you don’t get your act together, you’re going to end up like your daddy. Isn’t he in prison or something?”

“I don’t have words to describe how much that hurt me.”

He lagged behind his peers in English grammar and skills so much so his elementary school counselor switched him to ESOL – mainly because his given name was Manuel Valentin Sarmiento. But Scott didn’t speak Spanish.

“I like English and I would like to know why I’m in your class,” he told his teacher during a class activity for students to express in English what they liked. Despite this revelation, the school kept him in the class for a year.

Scott gave up on education – his schools and educators failing him. The tone and uncaring voices he heard from teachers left him unmotivated and uncared for seeking a sense of belonging on the streets.

But Scott reinforced how the tone of a caring, loving teacher can turn it around for a child. He credits Gruwell for encouraging him to apply to college at University of California at Berkley even though he’d never heard of the prestigious university.

“It’s where Jason Kidd plays basketball,” she told him. “I didn’t know who Jason Kidd was but it was the way she said it that reached me.”

“Your hope can become contagious,” he told administrators.

He got accepted and graduated at the top of his class and went on to pursue a graduate degree.

“I’m not the exception, the exception was Ms. G,” he said. “With teachers like mine (every child) can literally overcome every obstacle they are facing. You can be the exception.”