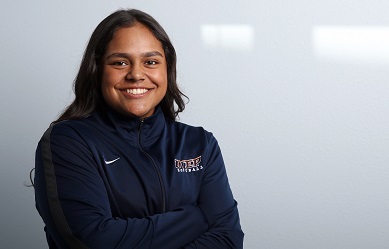 The freshman exploded in the batters box during the NM State Invitational with a .643 batting average, three home runs, nine hits and 10 RBI in her first four games of her collegiate career.

“Kasey (Flores) had an amazing opening weekend.” Head Coach Tobin Echo-Hawk said. “She provided a ton of offense in key moments for our team. We can’t wait to see how much she grows over the next couple of weeks.”

Flores did not waste any time making her mark on college softball or the UTEP record books this weekend. In the outfielder’s debut game versus Creighton, she began with a two-run single, and then promptly followed up with the first home run of her career into deep left center field, adding two more RBI to her total.

History was made when the freshman hit a three-run rocket over the center field fence, ending the game, 13-4. With that homer she finished the game with three hits (one single and two home runs) and seven RBI, which is tied for the second most in a single game by a Miner and is the most in debut game in UTEP history. Her first day of college softball did not end there. In the following game against New Mexico, she added another long ball to her day, bringing her home run total to three.

There were no signs of slowing down for the freshman as UTEP entered its second day of action. Flores, over two games strung together five consecutive at-bats with a hit (three singles and two doubles) and added two more RBI to her season total.

The Horizon City native was a cornerstone for the Orange and Blue’s offense these past four games. With runners on base she had an incredible .875 (7-8) batting average, and with runners in scoring position she was a perfect 4-4 at the plate. Additionally, when the Miners were facing two outs in the inning Flores was again perfect, 3-3.

Flores is the first Miner to win C-USA Player of the week since Kaitlin Ryder garnered the achievement last season (5/7/18). The outfielder is in good company, as she the first UTEP freshman to win the award since All-American Camilla Carrera (3/10/08) and two-time All-Midwest Region winner Chelsea Troupe (2/16/09) accomplished the feat in their inaugural seasons.

Additionally, the NFCA office announced Tuesday afternoon that UTEP freshman Kasey Flores was one of the 18 Top Performers from around the nation in the opening weekend of the 2019 season.

Amongst the Top Performers there are 11 power five conference players, nine hitters, eight pitchers and only three true freshmen. Flores was the only non true-freshman pitcher to receive the recognition. Additionally, when compared to other selected Top Performers she ranks third in batting average (.643) and is tied for third in home runs (three) and RBIs (10).