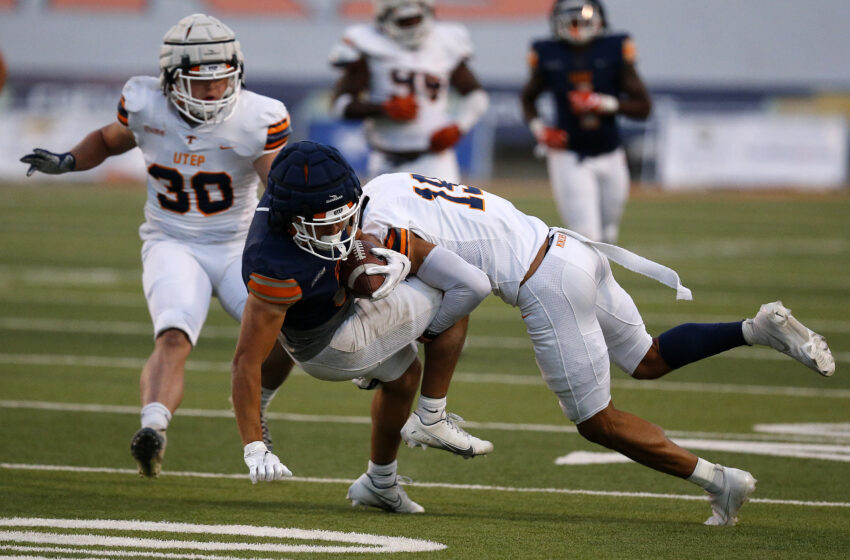 Over the course of two hours on Friday night, UTEP fans had the opportunity to get a sneak peek at the 2021 Miner Football team during the UTEP Spring Game at Sun Bowl Stadium.

“Obviously when you have something in this type of a setting, there is a lot to be gained from it,” head coach Dana Dimel said. “We had a great crowd and I was really pleased with the turnout. It was fun to actually have people in the stands. I think it made a difference for the guys. It all changes when you get underneath the lights and doing a game under the lights is definitely the way to go. It was good for attendance and it was a beautiful night.”

The 2021 Spring Game marked the first time fans were able to watch UTEP football in the Sun Bowl since Sept. 19, 2020, which provided a simulated game day atmosphere for the Miners.

Offensively, running back Quardraiz Wadley made his return to the gridiron after sitting out last season with the senior racking up over 60 yards on six carries and a rushing touchdown. Reynaldo Flores also scored for the Miners and had 47 receiving yards in the scrimmage, while Jalen Joseph carried the ball 16 times for 64 yards.

Newcomer Tyrin Smith had four receptions for 64 yards and Dennis Barnes showed out on both sides of the ball as a wide receiver and cornerback. Gavin Hardison also racked up over 130 yards in the passing game to close out spring workouts.

On the defensive side of the ball, McKel Broussard snagged an interception, while Armonie Brown picked up a sack during the second half of the scrimmage.

“We got better at tackling, which is good because we needed that,” Dimel continued. “I think for the most part, we tackled well early defensively. I thought a lot of guys stepped up. We played a lot of our second defensive line to get them some experience and there is some good depth there. It is about building depth for our football team, and I thought that is what we really accomplished tonight. Our guys did some really good things out there on both sides of the ball.”

The season kicks off with the “Battle of I-10” on Aug. 28 at NM State before the Miners host Bethune-Cookman on Sept. 4 in the home opener at the Sun Bowl.

For complete coverage of UTEP Football, be sure to follow the Miners on social media at @UTEPFB (Twitter/Instagram) or click here to visit the official home of UTEP Athletics.

Right before the spring game started, UTEP Athletics spent Friday evening showing off the new digs as the department held a ribbon cutting event for the Sun Bowl Renovations Project.

Members of the athletic department, UTEP President Dr. Heather Wilson, along with representatives from GECU, Paul and Alejandra Foster, and the Hunt Family Foundation were all on hand Friday evening to officially unveil the completion of the Sun Bowl Renovation Project.

All involved in the private ceremony were instrumental in the overall development of the Sun Bowl Renovation Project, including the installation of:

A lead gift of $5.1 million by El Paso businessman and philanthropist Paul Foster and his wife, Alejandra De la Vega Foster, ensured the completion of the Sun Bowl Renovation Project. To recognize their incredible support, the structure housing the press box and the Hunt Family Sky Lounge in the iconic stadium has been renamed the Paul and Alejandra Foster Tower.