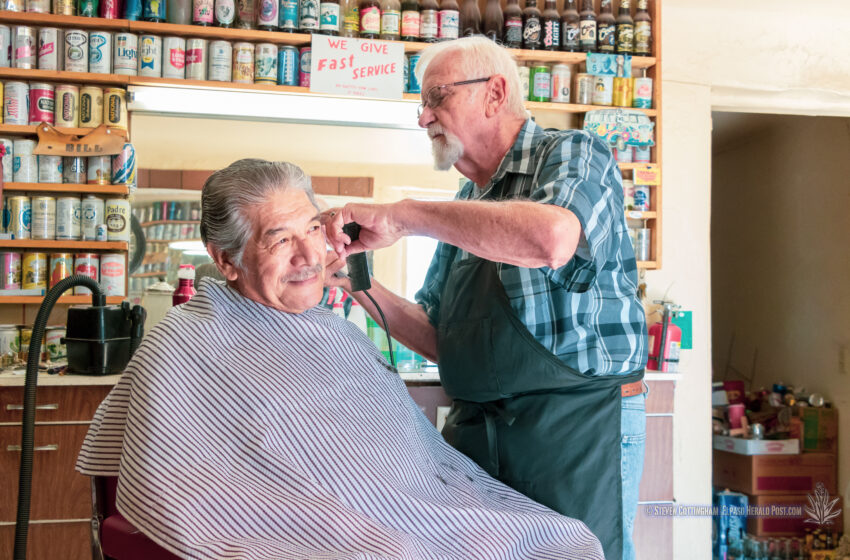 This past week I found myself in a part of the Northeast I don’t often get to visit. While driving down Dyer, past where it crosses McCombs, I found myself thinking of four things: cans, haircuts, western burgers and writing.

Suddenly, I could smell the liquid the barber would put in your hair as he combed it and I could taste a western burger from Bradley Elementary school as if it were all happening right there in my car.

It was then that I realized…I was heading the wrong way. I told you, I don’t get out to the Northeast all that often. I made a U-turn, looked to my right, and was suddenly staring at my childhood!

My father would take me every three weeks for a haircut. We would go to the same barber, sit in the same chair, and have our hair cut by the same man. When It was my turn, as Mr. Owens would put the seat booster, I would begin to follow the shelves on the walls, and my imagination would turn towards the cans and the probable stories behind each one.

Parkland Barber Shop was a magical place for a kid. Over the years there have been a few changes, but not very many. The soda machine is gone, a couple of the clocks and signs I remember are no longer on the walls, but the cans are there.

Shelf after shelf of cans.

While Mr. Owens was clipping away, I would look at those cans, those signs, and some of the objects made from cans and bottle caps, and my mind would begin to assign them stories, histories, and the adventures they must have gone through before finding their way into the shop.

Parkland Barber Shop goes back to a time when things were simpler, slower. Cable was just a handful of channels, there were no cell phones, and El Paso was much smaller than it is today.

Bill Owens, the barber who would cut my hair as a child has seen a lot of those changes, and growth all from behind those same barber chairs I sat in as a kid.

The shop was opened in January 1960 by Bill’s father.

“I’ve been working here more than sixty years,” said Bill.   I told Bill I was surprised that the can collection was still there.

“It gets to be more attached, this place, than your own house,” says Bill when I asked him what the most amazing thing was about being in the same place for so long.

“Mostly the neighborhood,” he says. “It was mostly bare out here in 1960. Now, you have so many buildings and the traffic on Dyer Street is twenty times worse than it ever used to be.”

I can second that! When I was a kid, for a while, we lived on Round Rock, just off Kenworthy, and that was the end of the city.

Now, US 54 is the North/South Freeway, and it’s non-stop housing developments, buildings, and constructions projects from El Paso to Chaparral.

I wanted to know what the worst thing was, from being in the same place for so long. I was sure there had to be something. I was wrong.

“I don’t know,” says Bill. “It’s kind of turned into that hobby that people say that if they had a hobby that paid money, they would have it made. It’s fun. Everyone who comes here is my friends.”

The Parkland Barber Shop is truly unique. It’s a step back in time, not only for me and my memories but barber shops in general.

That’s a sad thing, the loss of the neighborhood barber and barbershop. The place you could go, catch up with friends, news, and discuss anything and everything.

When Bill does finally close the doors to the shop, it will be a great loss to all El Paso.

Discovering that Parkland Barber Shop was still open was amazing. It also got me thinking about Bradley Elementary School even more. So, I decided to stop by the school that fostered my desire to write and see if it was as I remembered.

As I walked in the door, I could smell those western burgers. Bradley was the only school I know that made them. I loved those things, and I’ve never been able to recreate them.

What is a western burger?  I’m glad you asked!

A western burger is a sort of like a hamburger. It was made with seasoned ground beef, with cheese, and baked into a hamburger bun. As a kid, to me at lease, it was a mystery as to how they got the meat into that bun!

I’m sure you are wondering how a barbershop and an elementary school have in common? Bill’s place fed my imagination, where Bradley Elementary gave me the strength to write.

My childhood was not the best. Growing up in my house was not easy by any stretch of the imagination.

So, often, I would retreat into my world. It was my way, as a kid, to keep my sanity.

There was one day, it was in October, that I was getting a haircut. While sitting there, in that chair, I saw cans and decorations that made me think of vampires and canned carrot juice. Odd, right?

That night, when I was supposed to be in bed, I began to write what I thought would be the next great American novel. It’s 1979; I’m under my covers writing about a vampire that wants to stop drinking blood and start drinking carrot juice.

For days I’m writing this story. My little imagination was filling legal tablet after legal tablet with the story of a vampire that lives high above a village where he was begging people to grow him carrots, so he could stop drinking their blood.

Eventually, Ms. Brown, the principal asked me what I was doing, and if she could read it.

How could I say no?

Two days later I’m called to the office. Ms Brown told me that it was a wonderful story and that she made some corrections that would help the “flow,” and help “develop,” the story. I didn’t know what she meant, but I understood it all once I began to see her corrections throughout the pages.

She sent me home with the desire to write for a living, and a Dr. Pepper. What kid wouldn’t be happy?

Fast-forward to the present day, and here I am, still writing. Between Bill, his dad, Parkland Barber Shop, Bradley Elementary and Ms Brown, I’ve followed my dreams. I pray you’ve been able to follow yours!

Stories? Memories?  Let me know!  I would love for you to share them with me. Send them to me at Steven@EPHeraldPost.com 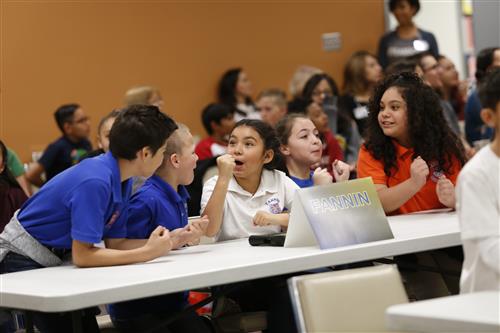 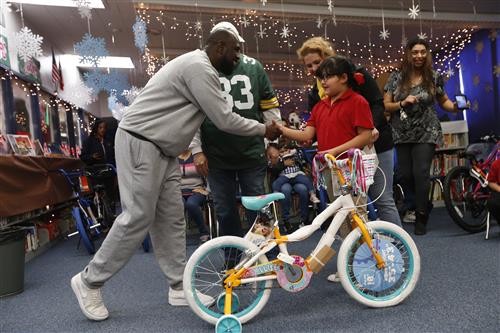 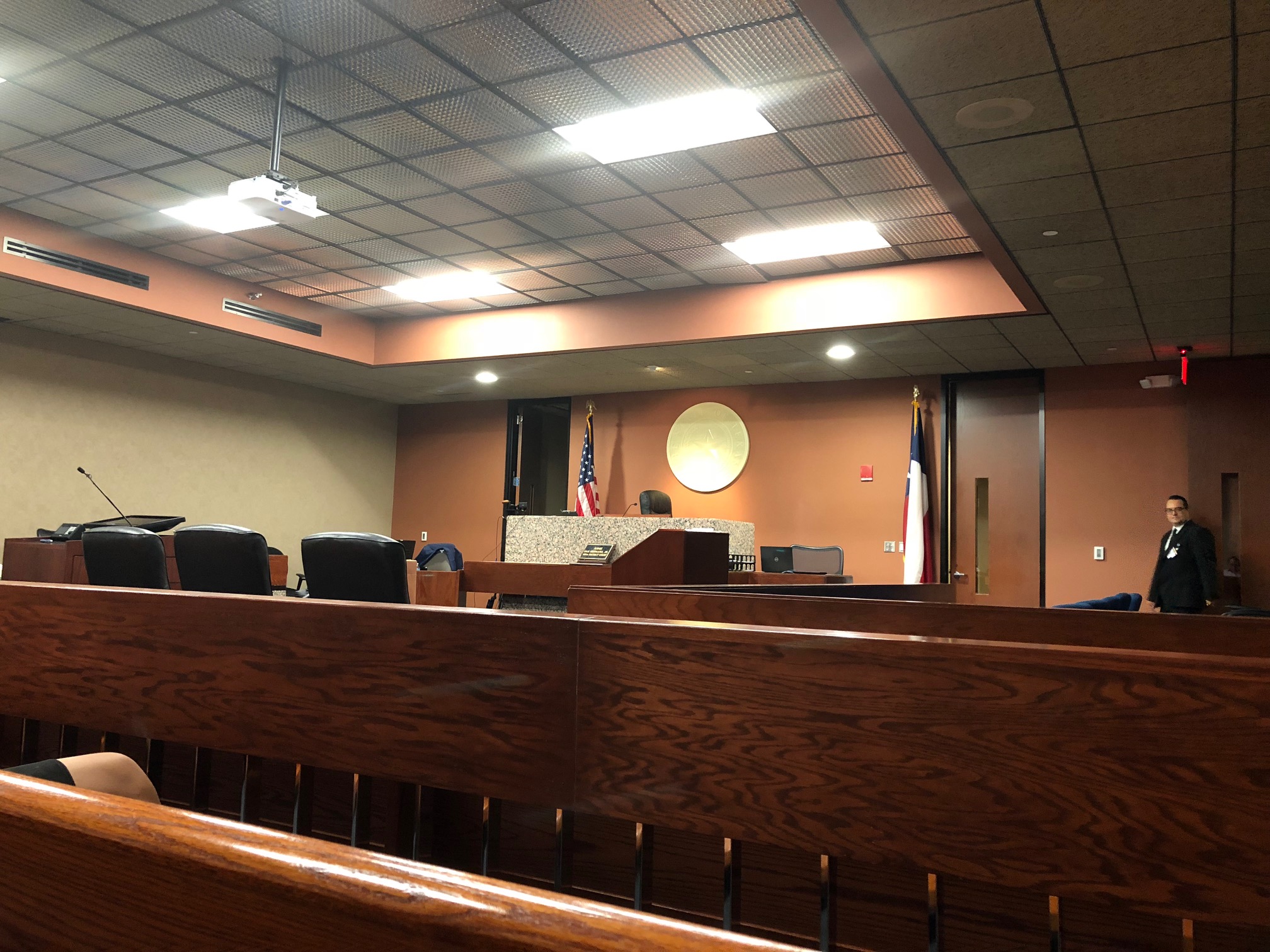