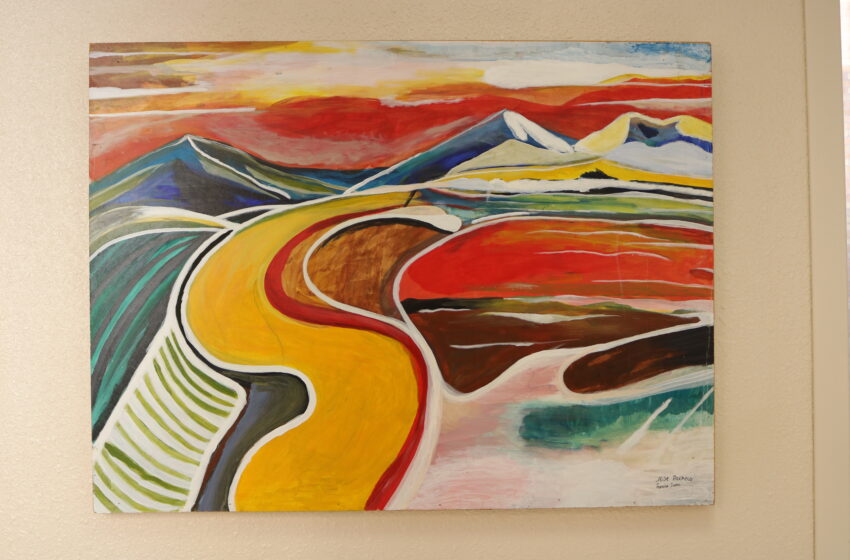 For me, it all started with a visit to the County Commissioners office. While I was waiting to take care of other business, I saw all this really great artwork on the walls. Not the typical art one would expect in a Courthouse, rather art that was created by groups of kids from El Paso.

I had to know more.

I first spoke to Candace McCann, administrative assistant to County Commissioner Andrew Hagerty. She told me what she know about the project, Creative Kids, and that the Honorable Anna Perez – when she was part of Commissioners Court – was the one that helped to get the art installed in the Courthouse.

So, armed with that information, I decided to just pop in on Judge Perez of the 41st Court, and ask her to share her story.

Eight years ago, Judge Perez says, while she was the Commissioner for Precinct One on El Paso’s Eastside, she presented the resolution to the Court in order to have the Creative Kids project bring art into the executive suites. The reasons for the resolution, and the desire to display artwork within the suites was simply because, “The walls were bare, and no one had thought of beautifying the space.”

Judge Perez says the person responsible for the project was her assistant, Cindy Hernandez.

Cindy said, at the time, that they needed to bring in artwork. The City was really motivated about public art, and Cindy said the walls were bare.

At the same time Judge Perez took her seat, the county was, in her own words, a sad place. There was low morale, high profile negative coverage of City/County actions. “We needed to change our image, and we did different things to change our immediate surroundings, hoping that it would impact our outlook.”

As I looked at, and photographed the art, even I began to feel happy, my spirits raised.

Each one of these pieces, I would later discover, has a story behind it. But looking at them, knowing it was created by kids, I could imagine how much fun they must have had, creating the piece. Then how proud they and their families must feel, knowing that others are finding enjoyment in their work.

“The art meant something. It was community art. It had a meaning,” says Judge Perez. “It wasn’t just artists doing art for their own personal satisfaction. These are kids that are moved by their own art.”

After I left the judges chambers, and before I even attempted to locate the offices of Creative Kids, I had to hear from Cindy Hernandez. Judge Perez says that she, and Cindy both had heard of Creative Kids prior to seeking them out to install the art.

They heard of them, why hadn’t I? I love art, and local artists, so what was I missing here? Who else knew of this rich bounty of art and artists hidden away in El Paso.

Cindy now works for Emergence Health Network. I asked her just how she learned of Creative Kids. “It was kind of strange,” she said. “I was sitting in my doctor’s office, and he had them on his walls.” She said she thought it was a neat idea, the public display of art created by kids in El Paso. After that, she began to see the art all over town.

You may have as well, without even realizing it.

When was the last time you paid attention to one of the shelters Sun Metro uses? The artwork you see, the giant poster there, that is done by a kid right here in El Paso. Their art is also found at Providence Memorial Hospital. The mural by the El Paso Museum of History. At the ballpark.

Their art is everywhere!

It was time to meet the people behind Creative Kids.

Creative Kids occupies a large building at 504 West San Antonio. From their front door, you can see the ballpark, and the bridge on Durango Street.  Interesting enough, under that same bridge, there are three pinatas – seemingly awaiting a party – thanks to Creative Kids.

When you walk in, you are met with wide open spaces. The walls are covered with art of all kinds and sizes. Tables hold works in progress.  Their work/exhibit space draws you in and shows you: art happens here

I met Andrea and Stephen Ingle, co-founders of Creative Kids.  The idea came about in 1997 when Andrea was taking her special education block while at UTEP, and Stephen was an art major.

While Andrea was a student teacher in the Canutillo district she had asked Stephen to come and teach art to her class. “There’s not art in the schools,” she said. “Especially for these special needs kids.”

As the kids and Stephen created a mural, she began to see the students bloom, and express themselves in ways they never had.  They decided to create the program after that.

So, what is Creative Kids?  Creative Kids is a community based art project that seeks to empower every kid that is involved in their program.

“It teaches multi-faceted ideas for kids to learn,” Stephen told me. “To work as teams and to become a leader. To exercise their ideas.” In fact, leadership, problem solving, and — all taught through the art process.

The program empowers youth to choose the direction they want their lives to take. Where they want to be, who they want to be. An example would be the six year Texas Guarantee Grant that helped them create a program they just completed with the Fabens Early College Program.

The Fabens programs aim was to infuse art into the everyday curriculum. Andrea said the evaluation of the program was over the top; of the

eighty kids in the program, all have gone on to further their education. That is better than the national average.

When I spoke to Judge Perez, she told me about STEAM (Science Technology Engineering and Math) and STEM (Science Technology Engineering and Mathematics). “You can find the art of kids in their rooms and notebooks,” she says. “The school districts really need to foster that (art). It does not take a lot of resources to frame things, to put them up. To engage in some extra time to have contests, or volunteers to teach kids how to do it. It’s an investment in time, and the kids.”

Judge Perez, just like Andrea and Stephen, dislike the fact that there are limited art programs in our public schools.  When it comes to Creative Kids, the participants learn and work with varied art media: Photography, and how to process film in a darkroom. Digital photography. 3-D printing. Silkscreening, metal sculpture, painting.

And the diversity of their program goes beyond the materials and media.

They work with children at Providence. Those kids who are battling cancer, or disease, as well as kids with special needs. They have the only after school program in Fabens. They visit the shelter, the center against family and sexual violence, host Saturday programs at their downtown location, and so much more.

“Now that we have gone through the challenges in school, and after school programs” Stephen told me, “we’re setting the foundation in both of those environments so that we can tactically, over the next two years, hopefully start franchising our ideas into school systems, partner with school districts in states, non-profits, shelters, organizations that can benefit from using this as either an educational tool, or therapeutic tool, to help kids learn and excel.”

After witnessing their program in action, and seeing the fruit it has produced, I know each of these kids will excel. Creative Kids is empowering program participants in ways that will lead to lasting change within the kids, their families, and the communities in which they live.