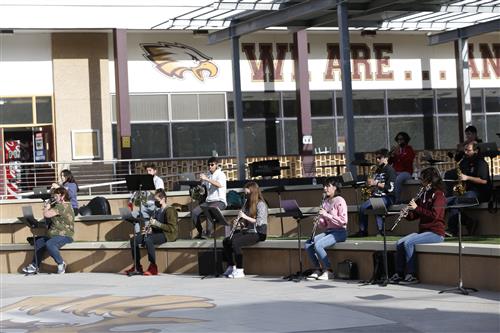 Chapman launched the community band after it became clear that concert band season would not happen this year due to health concerns. With the approval of the District and following strict health guidelines, Chapman will welcome any high-school student musician from EPISD to rehearse at the new Bond-funded Andress High School outdoor amphitheater.

So far, more than 50 band kids have begun venturing to the campus on Monday and Wednesday afternoon to do what they love.

“We miss it. My kids miss it,” Chapman said. “Kids are sitting online and playing scales and doing music theory and working out of a textbook and playing virtual music through smart music. But they’re sitting in their bedroom by themselves. We need each other. We need to create. It is good for our soul.”

Chapman sees this as an opportunity to bring back a sense of normalcy for band kids who missed out on concert season, marching band season and other events that traditionally define the school year. Nearly all high schools in EPISD are represented in the band, but Chapman continues to promote the project hoping to draw in representatives from every high school.

“This is a way for all of our kids to feel like part of something,” Chapman said. “It’s a chance for the students in EPISD to have a real, live in-person music opportunity with a director from UTEP and myself. It’s an opportunity they haven’t had this year.”

Chapman especially reached out to his seniors, encouraging their participation by telling them “this is all I can offer you.”

Franklin junior AJ Genevero, who plays euphonia, finds band these days a bit boring with the lack of on-site students and the focus on fundamentals. Initially, ‘iffy’ about joining in, he craved the opportunity to play music with others who share his same passion for band.

“Band is an escape for me,” he said. “With everything that’s going on, it’s always there. I can always rely on it for something to do and or something to take my mind off stuff.”

Andress junior Hailey Soto used her time at Wednesday’s rehearsal to brush up on her percussion skills before joining in the bigger group. She jumped at the chance to join in.

“In the pandemic, it’s been hard to meet new people and interact people,” she said. “It’s hard to play percussion at home. I think it’s a nice opportunity for people that don’t get out often because of pandemic. It’s also nice to bring other schools together.”

Bringing the students from different schools together has definitely been a challenge for Chapman. He’d even been told “that’s a lot of work.”

But he isn’t fazed.