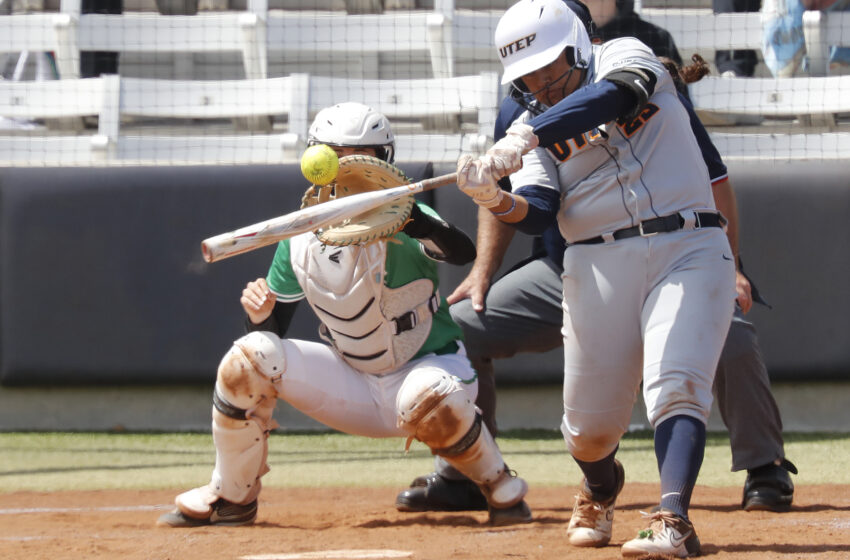 Junior utility Kasey Flores knocked in UTEP’s only runs of the game with a two-run homer to center field for her sixth longball of the season | Photo by Ruben R. Ramirez – El Paso Herald Post

Junior utility Kasey Flores knocked in UTEP’s only runs of the game with a two-run homer to center field for her sixth longball of the season.

Sophomore utility Zaylie Calderon tossed four-and-two-thirds innings for the second time in back-to-back days for her longest outings since February 19 against Northern Colorado. Calderon tied a career-high with five strikeouts in her relief appearance.

Calderon owns the lowest ERA and highest strikeout total on the team, now sitting at 4.44 and 34 K’s, respectively, after allowing one earned run today.

Senior infielder Ariana Valles – who was celebrating her Senior Day with a crowd of over 40+ family members in attendance – entered the game as a pinch hitter in the bottom of the fourth inning. Valles worked an eight-pitch at-bat that resulted in a single to center field.

At the plate, North Texas collected their seven runs on nine hits and two UTEP errors. The Mean Green homered twice off the bats of Maia Wark and Tayla Evans.

Next up, UTEP softball travels to Ruston, Louisiana to take on Louisiana Tech (14-22, 4-4 C-USA) in a four-game series featuring two double-headers both with first pitch times of 12 p.m. and 2 p.m. MT.