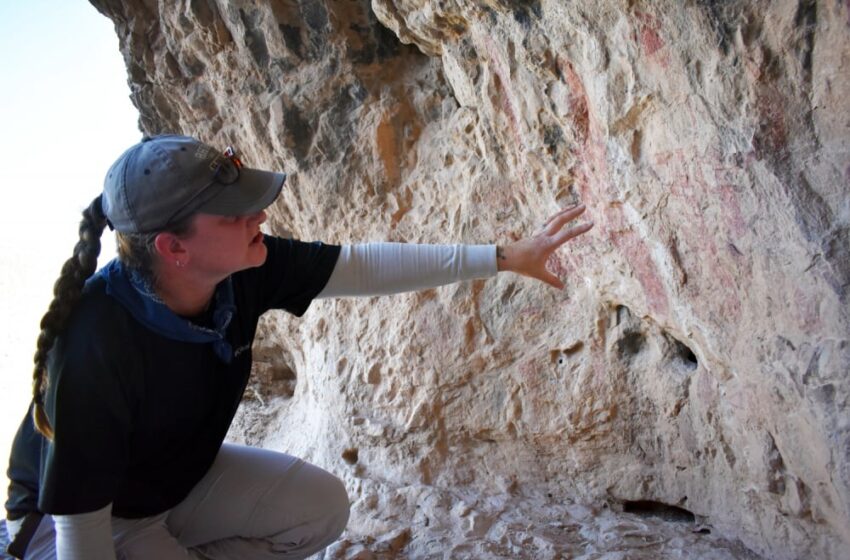 About two years ago, Belinda Mollard, a senior archaeologist at Fort Bliss, was escorting officials from the Army’s Installation Management Command to an archaeological site on post when two Soldiers approached and demanded to know what they were doing.

Their actions delighted her.

“It showed that all our education efforts were paying off,” Mollard said.

Mollard, whose official title is Cultural Resources Manager, Senior Archaeologist and Tribal Liaison for the Fort Bliss Garrison Directorate of Public Works Environmental Division, is one of a team of five archaeologists who manage the roughly 20,600 archaeological sites on the 1.12 million acres of Fort Bliss.

Members of the archaeology team try to visit the sites as much as possible to monitor them, but Soldiers can also help in a variety of ways – including by politely approaching people they see in areas around the sites.

Another way is to leave sites undisturbed, Mollard said.

“Rock art is very fragile, so the oils from our hands, and especially lotions, sunscreens, perfumes, things like that, that will actually destroy the rock art faster than natural processes,” Mollard said. “So we ask people not to touch rock art for sure, but even at the sites, we ask you not to touch anything or pick anything up.”

If Soldiers think they might have found a new site or human remains, they should leave everything undisturbed and contact installation officials, Mollard said.

“As a people, we’ve been here a long time,” Mollard said. “We do have human remains that pop up every now and then, so we just ask, ‘Please just let us know.’”

The installation has two environmental liaisons for the training ranges: Shane Offutt and David Black, Mollard said. Offutt is a trained archaeologist with a military background, and Black is a biologist, but both are knowledgeable about potential issues.

It’s important to let officials know if someone has found remains, Mollard said.

“If you see something you think is bone, you need to tell us,” Mollard said. “You need to let us know right away. I always tell them it’s not their job to investigate, it’s mine.”

It doesn’t matter what time of the day or night it is, Mollard said.

“A lot of times we’ll get a call, and I don’t mind, I’ll come out at midnight on a Friday or three o’clock in the morning on a Saturday, to make sure it’s coyote,” Mollard said. “That’s fine with me. I’d rather do that than have somebody decide to go and investigate and find out it is human.”

Two caves on Fort Bliss illustrate the importance of properly preserving archaeological resources, Mollard said. They are in close proximity, and one features well preserved, iconic rock art from the Jornada Mogollon period, and the other features mostly obscene graffiti from the 1970s.

“When you look at the archaeological history of this site and look at all the stuff that went on here, and then this is what happened because it wasn’t protected, it’s kind of a shame,” Mollard said of the site with the graffiti during a monitoring visit July 19. “We do the best we can now, but there’s nothing we can really do to reverse this.”

Tribal members realize that eventually the rock art, for example, will be gone due to natural erosion, but it is still important to protect the sites, Mollard said.

“It’s a delicate balance of how we protect the site,” Mollard said. “We don’t want to stop the natural course of the site, but we do want to stop people from coming up and spray painting.”

Although Fort Bliss archaeological sites are off limits to the public, people can learn more about archaeology in the Fort Bliss area at the El Paso Museum of Archaeology at 4301 Woodrow Bean Transmountain Drive.

Also, at the Hueco Tanks State Historic Site (6900 Hueco Tanks Road) people can take self-guided or staff-guided tours of pictographs and petroglyphs, and at the Gila Cliff Dwellings National Monument in Silver City, New Mexico, people can visit preserved cliff dwellings of the Mogollon people, cousins of the Jornada Mogollon.