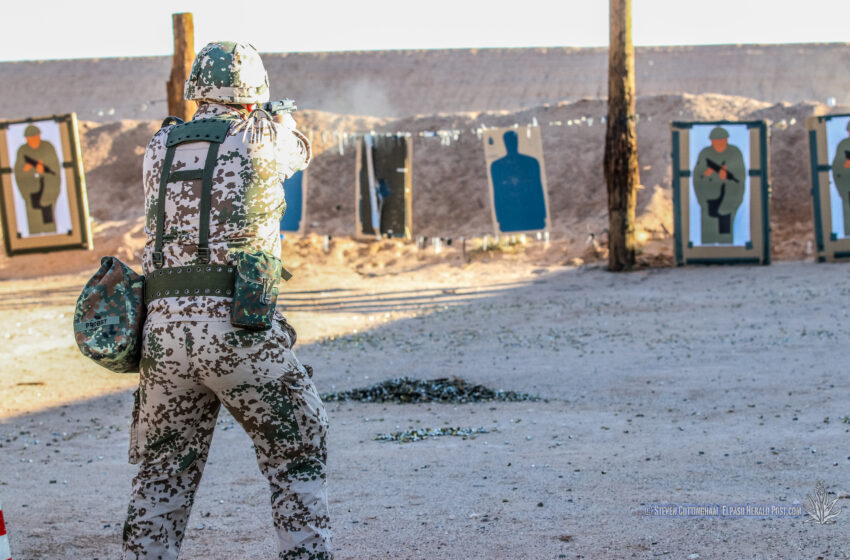 Fort Bliss soldiers tested their fitness levels and soldier skills while getting a chance to earn a prestigious honor from a key partner nation.

About 130 soldiers went through a series of mental and physical challenges over five days and tested for the German Armed Forces Badge for Military Proficiency, or German Proficiency Badge for short.

One hundred and six soldiers made the cut and earned the badge, which comes in three classifications – bronze, silver and gold, with gold being the highest.

For U.S. soldiers, it was a way to shake up their training and also learn how the German military operates and trains. The proficiency badge is one of the foreign military badges that American soldiers can wear on their dress uniforms.

For the German Air Force, it is a way to say thanks for decades of hospitality and support at Fort Bliss.

Spc. Sarah Hernandez, from El Paso, said it was an amazing experience to be able to compete for the badge. Hernandez, a graduate of Santa Teresa High School, is a combat medic by trade and works at William Beaumont Army Medical Center in the surgical recovery ward.

Going through the testing for the German Proficiency Badge was a great way to sharpen up her soldier skills and get back to basics, Hernandez said.

“It is great. I love it,” Hernandez said. “In the hospital, you go through phases where you feel a little less like a soldier — doing more civilian-type medical procedures.

“And to be given this opportunity, it gives you a reminder that this is who I am first,” Hernandez said.

Candidates for the German Proficiency Badge went through four varied tests of skills.

They started out doing a 100-meter swim in uniform, but without boots.

German organizers say this is often the toughest test for American soldiers.

They then were challenged during a German physical fitness test – which consists of a shuttle sprint, a timed hanging event from a chin-up bar and a 1,000-meter run.

Next, they were tested on their marksmanship skills using German pistols.

They finished up with a ruck march carrying more than 30 pounds. The length varied – from around 4 miles to 7.5 miles — depending on which classification of the badge they were going for.

The testing was held during regular physical training hours in the morning, so it didn’t interfere with soldiers’ everyday duties.

The German air force conducts testing at Fort Bliss for the proficiency badge and a separate marksmanship badge several times a year.

It is a way to say “thank you” to their American hosts for more than 60 years of partnership at Fort Bliss, said Command Sgt. Maj. Michael Zantis, the senior enlisted leader for the German air force at Fort Bliss.

“We get so much from Americans at Fort Bliss,” Zantis said. “They help us with everything we need. This is one of the things we can give back.”

The Germans have had a presence at Fort Bliss since 1956. In recent years, they have been downsizing. The German Air Force shut down its North American command center at the post in September 2013.

Staff Sgt. Patrick Lopez, of Shelton, Wash., said he had a great time while testing for the German badge.

“It is awesome,” said Lopez, who is part of the 1st Training Support Battalion, 364th Regiment.

“I am totally honored to be here and be a part of this,” Lopez added. “It is amazing. It is a lot better than I thought it would be. I didn’t know what to expect. I’m having a great time.”

Lopez’s unit is based out of Joint Base Lewis-McChord, Wash., but is here at Fort Bliss for a yearlong assignment.

Second Lt. Jerome Jones, of Baltimore, said the testing was a lot tougher than he expected.

“Honestly, it is difficult,” said Jones, a member of the 93rd Military Police Battalion.

“I thought we could come out here and do this with no difficulties, that it would be easy. It’s not,” Jones continued. “The Germans have a difficult test. I am glad to be able to participate in it.”

David Burge is a news producer at ABC-7 in El Paso. He has more than three decades of experience writing for newspapers in California, New Mexico and Texas. Covering the military is a particular passion.